The Assimilation of The Greenland Norse With Native Peoples

As I have mentioned in other writings, sooner or later some group of scientists will undertake to sample the mtDNA of certain native peoples of southeastern Canada, including the Cree of the Ungava Peninsula of Quebec, and the northeastern United States for Norse genetic markers.
Such a study is the only way to finally put to rest the 1000-year old mystery of what happened to the Greenland Norse settlers.
This effort should concentrate on a cross section of pure blooded members of the Cree, Ojibwa, and Iroquois Indian tribes. I submit that Norse genetic markers will be found in these Indians as they have been found in the male Inuit(Y-chromosome) of Greenland, although none have been found in female Inuit.
The Greenland Norse, Niels Linnerup and Søren Nørby (Laboratory of Biological Anthropology, University of Denmark, Copenhagen, 2002) 107
This work will no doubt continue and extend into other areas of the Canadian Arctic.
Given the tremendous distances involved, the high cost of travel in the Arctic, primitive conditions, and the shortness of the summer season, it seems plausible that DNA studies will prove to be cheaper than archaeological excavations.
Posted by J A Hunsinger at 12:26 3 comments:

Climate Change and the Greenland Norse 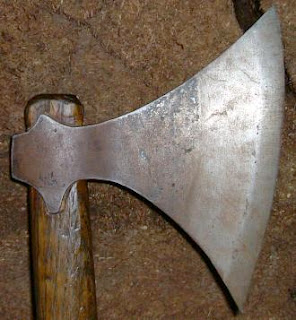 About 700 AD, the advent of the Medieval Warm Period(700-1200)gave rise to the Viking Age, ultimately leading to the attack on the monastery at Lindesfarne, an island off the northeastern coast of England in 793.

The warmer weather increased production of everything they ate. Populations among the Viking tribes burgeoned dramatically. This eventually led to thoughts of expansion and conquest; the norm throughout human history.

The ice-locked fjords began to clear earlier in the season than normal, allowing the Northmen to sail from their northern fjords to go iviking. The length of the raiding and trading season continued to increase over the 500-year period of the Medieval Warm Period.

While all this Viking activity continued in the homelands of the Norse people and over much of what is now modern Europe, about 870, Norse settlers reached Iceland. Many more followed the original settlers; the population continued to grow until all the good land was occupied.

The Vikings exploded out over the north and western Atlantic Ocean as a consequence.

In 986, Eirik the Red sailed from Iceland with 25-ships loaded with settlers and their goods. Fourteen ships made it safely to Greenland.

Thus began the 500-year saga of the Norse Greenland settlements.
The five hundred years of comparatively benign weather during the Medieval Warm Period fostered the Viking Age. Earth's next weather cycle, the Mini-Ice Age(1300-1800), played a major roll in ending it, especially for isolated--from the homeland--Norse Greenland.

The northern hemisphere became colder and colder as the Mini-Ice Age increased in ferocity.

The Greenland Norse lifestyle could not be maintained in the face of Climate Change and a changing environment--starvation loomed.

Finally, sometime in the early 15th century, the last holdouts on Greenland joined their brethren in North America.

The Norse people of Greenland joined with the native peoples of North America, never to be seen again.
http://www.vinlandpublishing.com/
Posted by J A Hunsinger at 13:08 No comments:

Some of the many unanswered questions about the Greenland Norse: did they assimilate with the natives of the Canadian Arctic?

If so, when and with whom?

We can never know for certain, but by about 1425 all had disappeared from the Greenland settlements. As I have mentioned previously, they were not seen again. They disappeared: no bodies, no ships, no tools, nothing related to them has ever been found.

Two distinct Arctic native cultures are involved with the Greenland Norse, the Dorset, or Tuniit people, and later in about the 13th century, the Thule, or Inuit people migrating from what is now the western Canadian Arctic regions.

In support of my contention that a gradual process of assimilation with these native cultures of the Arctic. and the natives of North America, began early in the history of the Greenland Norse settlements I make reference to numerous Norse artifacts found in medieval Thule dwelling sites on the east coast of Ellesmere Island and Skraeling Island, at the head of Alexandra Fjord on Ellesmere's east coast.

I do not mean the odd spindle whorl, ship rivet, broken needle fragment, or a couple links of chain mail. There are too, many artifacts to list here: a complete carpenters plane, iron wedge, ship rivets, knife and spear blades, wool wadmal cloth, numerous pieces of chain mail(all thought to have a common origin), odd gaming pieces, and so forth. These artifacts have been carbon dated to the mid-13th century.
Ellesmere - Vikings in the Far North, Peter Schledermann, 1977-1980. Vikings, The North Atlantic Saga, William Fitzhugh and Elizabeth Ward, (Smithsonian Institution Press, Washington DC, 2000)248-256.

So, the answer to the question is obvious. The Greenland Norse did regularly contact the native peoples of the Arctic and that contact was prolonged and intimate, because the artifacts were found in Thule house ruins.

Those particular Norse people had already assimilated.
http://www.vinlandpublishing.com/
Posted by J A Hunsinger at 11:15 1 comment:

The hand wringers of climate change refer to the present scenario as Global Warming. Something else is also happening. We can call this scenario Global Cooling. The two work together because that is how the planetary climate engine works. You cannot have one without the other.

The weather on this planet is controlled by the sun and the oceans working in concert. Without this synergy much of the inhabited areas of the northern and southern hemispheres would be uninhabitable.

Simplistically speaking, the sun transmits most of its solar radiation to the earth along the equatorial belt, heating the oceans of the world and setting up outflowing currents that emanate north and south from the equator. At the same time, cold water from the polar regions sinks to the ocean floor establishing a flow pattern in the direction of the equator as they under ride the warm water flowing on the surface.

All of this circulation occurs automatically because of the forces at play, hydrodynamics in other words. With climate change the dynamics change. British scientists have reported that the warm water currents flowing toward northwestern Europe have declined by 30% since the 1950's. There also appears to be a 50% reduction in the amount of cold water flowing from the poles. Computer models of this dynamic predict that the North Atlantic current will cease to exist in 50-100 years. National Geographic News, James Owen, November 30, 2005.

The same article points to the fact that the melting Arctic and Antarctic ice is diluting the salt water of the Arctic and Antarctic Oceans. The dynamic of circulation dependent on sinking cold water flowing south from the north pole, or north from the south pole, to bring the warm water of the equatorial seas north and south, is stalling as a result.

Now there are 6B people on the planet. Will the mechanics of global climate change have an impact on us? Absolutely! We can expect war, pestilence, and famine to occur on an unprecedented scale. What can we do about it? Very little. That will become abundantly clear as conditions worsen in the marginal areas of this planet, where the huddled masses of the have-nots reside. http://www.vinlandpublishing.com/
Posted by J A Hunsinger at 14:07 No comments:

How would you like to awaken to headlines screaming: Famine Widespread. Millions Dying of Starvation?

There are six billion of us, give or take. The fastest growing populations have the least: they are deficit societies. People in Africa--all of the continent--the Indian sub-continent, much of continental Asia, Asia Minor, much of South and Central America, all of Mexico, every island in the Caribbean--well, you get the picture, surely.

Like rats or lemmings, "we the people," are positioning ourselves for disaster on a scale that defies comprehension. Can we feed the world, save the disenfranchised? NO! In the final analysis why would we? Our survival would be compromised.

The minions of human-caused-global-warming are nattering about flatulence in hogs, cattle, horses, people who eat too many beans, methane belches from swamps, glaciers breaking up and melting, polar bears, walrus habitat, and so on and so forth. They are focused on carbon footprints for all of the 6B Homo sapiens. I wonder, do they really believe that even a minuscule percentage of these masses even know about carbon footprint, or care for that matter? Of course they don't. Furthermore they will not have heard the term before they succumb to starvation.

A large American conglomerate has been focusing on food production for some time now. I won't identify them, except to say that their acronym begins with the letter "A." Suffice to say that they have been quietly gobbling up productive farmland for many years. Why? Food, my friends. They want to control the availability of food. And, they will.

War, Pestilence, and Famine are the three natural population controls. All three will be visited on the world populations in the areas that I have mentioned as we proceed into the same global conditions that destroyed the two settlements of medieval Norse Greenlanders about whom I write.

The Grim Reaper cometh; he will claim millions.
Posted by J A Hunsinger at 16:46 No comments: