The second book of the Axe of Iron series, Confrontation, is in the publication process now. Initial release through my distributor, AtlasBooks, is scheduled to be in January 2010. 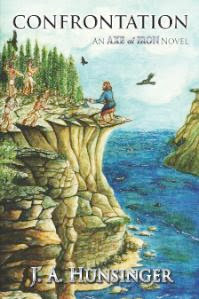 In Confrontation, two calamitous events occur that pave the way for the hostile beginnings of an assimilation process between the Greenland Norse settlers and the natives of Vinland. The first mixing of cultures occurs when a woman of the Northmen, Thora, and Deskaheh the Haudenosaunee, marry. This union, accepted enthusiastically by the Northmen, opens a window into the native mind.

For all the people of this land the way is rocky and fraught with danger at every turn, but the acceptance and friendship that develops between the Northmen and the Naskapi, another native tribe, over an affair of honor, the eventual acceptance of a young boy of the Northmen by his Haudenosaunee captors, and a scenario that seems ordained by the will of the gods, makes it all begin to fall into place, as it must for the Northmen to survive.

Will this developing relationship allow the Northmen to remain in the homeland of the Naskapi, or are they doomed to failure? The settlers must deal with that question on a daily basis.

Standing in their way are uncounted numbers of indigenous peoples, the pre-historical ancestors of the contemporary Cree (Naskapi), Ojibwa (Anishinabeg), and Iroquois (Haudenosaunee) Indians. From the outset, the warriors of these various tribes violently resisted the incursion of the tall, pale-skinned invaders. The overwhelming numbers of the native peoples in Vinland hold the fate of the Northmen in their hands. The success or failure of the settlement at Halfdansfjord hangs in the balance.
Posted by J A Hunsinger at 15:35 1 comment:

Take a moment to read the Books In Sync Author Spotlight Interview of author J. A. Hunsinger.

This comprehensive interview covers his historical fiction books about the Greenland Norse people, their assimilation with the pre-historical natives of Canada and the USA, his views on writing, and tips on what writers might want to avoid.

A lot of information is disseminated in the interview and on this terrific site for writers and readers.
Posted by J A Hunsinger at 20:31 No comments:

The Medieval Greenland Vikings Can Teach Us About Climate Change

I wrote this article in May 2008. Now that Al Gore's climate change hoax has been exposed for what it has always been - a pack of lies for monetary gain - I am running the article again because it cut to the chase when I wrote it, and it still does today.
The article also ran on P-19, of the Scandinavian Press, Spring 2009 issue, if you'd like to check that out.
***
The Northern Hemisphere of this planet is in a normal warming cycle. It began to manifest itself as the preceding cycle, the Mini-Ice Age (1300-1800), wound down about the mid-19th century. Nothing in global climate happens overnight. Each cycle is of about 500-years duration. With that assumption, we can say that the midpoint of this warming cycle that we are enjoying will be about 2100. In other words, we can expect the climate to gradually trend toward warmer and dryer for the next 92-years. Then it might get worse, historically speaking that is. At the same time, there will be periodic cycles of colder, wetter weather in parts of the globe that have never experienced such in living memory.

The advent of the Medieval Warm Period (800-1300) gave rise to the Viking Age (793-1150).The warmer weather increased production of everything the Vikings ate. Populations among the Viking tribes burgeoned dramatically. This eventually led to thoughts of expansion and conquest; the norm throughout human history. The ice-locked fjords began to clear earlier in the season than normal. The length of the raiding and trading season continued to increase over the 500-year period of the Medieval Warm Period. The Vikings exploded out over the north and western Atlantic Ocean, settling Iceland, Greenland, and areas of northeastern North America. The five hundred years of comparatively benign weather during the Medieval Warm Period fostered the Viking Age. Earth's next weather cycle, the Mini-Ice Age (1300-1800), played a major roll in ending it, especially for isolated--from the homeland--Norse Greenland. The Greenland Norse lifestyle could not be maintained in the face of Climate Change and a changing environment--starvation loomed. Of all the single-cause explanations for the death of Norse Greenland, Climate Change has been the most durable. (Thomas McGovern, Vikings, The North Atlantic Saga, The Demise of Norse Greenland, 2000-Smithsonian Institution, 330-331.)

Now, if the present global Climate Change cycle - Global Warming - is our responsibility, you know carbon offsets, CO2, and whatnot, if we caused this calamity, how do you explain the Medieval Warm Period (800-1300)? It was warmer in the Northern Hemisphere then than it is now. Perhaps the Vikings, the Greenland Norse people whom I write about caused it with their peat fires, flatulent livestock, and whatnot. Sounds ridiculous, huh? It is ridiculous. They had nothing more to do with their natural planetary climate cycle then, than we do with ours today. Remember, all of this climate stuff has happened before. It has been happening for 18,000-years that we know about.

The sun and the oceans working in concert control the weather on this planet. Without this synergy, much of the inhabited areas of the northern and southern hemispheres would be uninhabitable. Simplistically speaking, the sun transmits most of its solar radiation to the earth along the equatorial belt, heating the oceans of the world and setting up out flowing currents that emanate north and south from the equator. At the same time, cold water from the Polar Regions sinks to the ocean floor establishing a flow pattern in the direction of the equator as they under ride the warm water flowing on the surface. Therefore, under ideal conditions a massive exchange of hot water from the equator and cold water from the poles occurs, giving us hominids the benign weather conditions that we enjoy over much of this planet.All of this circulation occurs automatically because of the forces at play, hydrodynamics in other words. With Climate Change, the dynamics change. British scientists have reported that the warm water currents flowing toward northwestern Europe have declined by 30% since the 1950's. There also appears to be a 50% reduction in the amount of cold water flowing from the poles. Computer models of this dynamic predict that the North Atlantic current will cease to exist in 50-100 years. National Geographic News, James Owen, November 30, 2005. The same article points to the fact that the melting Arctic and Antarctic ice is diluting the salt water of the Arctic and Antarctic Oceans. The dynamic of circulation dependent on sinking cold water flowing south from the North Pole, or north from the South Pole, to bring the warm water of the equatorial seas north and south, is stalling as a result. This fact will make the northern and southern hemisphere much colder within the next 50-100 years.

Now there are six billion of us, give or take. The fastest growing populations have the least: they are deficit societies. People in Africa--all of the continent--the Indian sub-continent, much of continental Asia, Asia Minor, much of South and Central America, all of Mexico, every island in the Caribbean--well, you get the picture. Like rats or lemmings, we are positioning ourselves for disaster on a scale that defies comprehension. Can we feed the world, save the disenfranchised? NO! In the final analysis why would we? Our survival would be compromised. Shortages are like a snowball rolling down a hill, they are cumulative. Food shortages will translate to less food to send to feed the populations of all the undeveloped countries that we already support, because they cannot feed themselves; we will keep what we have for ourselves; and nature will take its course with them-they will begin to starve.

Entrepreneurs and scientists are playing the well-meaning, misinformed, easily manipulated, masses of earthlings like the proverbial banjo. Why, you might ask? Because the politics of human-caused global warming offer enormous profit potential.

J. A. Hunsinger, Vinland Publishing, http://www.vinlandpublishing.com/ ©2009 Jerry A. Hunsinger, All Rights Reserved
Posted by J A Hunsinger at 10:23 No comments: