The following fascinating article from Postmedia News, posted on Canada.com, detailing the excavation of a pre-European contact artifact - a wrought iron axe head - at the site of the largest Huron village ever excavated in Canada brings to mind many questions as to its origin. Amazingly, the archaeologists neglect to mention that the axe head could have originated with the Greenland Norse explorers that I write about in my Axe of Iron novel series. I predict such a possibility will occur to them, because the date of all the surrounding strata where the axe head was found would seem to indicate a Greenland Norse origin as the only viable possiblity.

***
A Canadian archeologist who excavated the remains of a 500-year-old First Nations settlement near Toronto has revealed a stunning discovery: a carefully buried, European-made metal object that somehow reached the 16th-century Huron village nearly 100 years before the documented arrival of any white man in the Lake Ontario region. 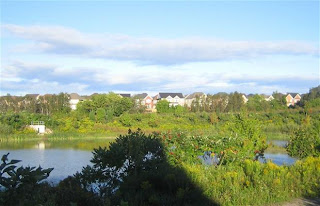 The unearthing of what appears to be part of a wrought-iron axe head at the so-called "Mantle" archeological site in present-day Whitchurch-Stouffville, Ont. — a fast-growing suburb about 40 kilometres east of Toronto — is showcased in a new documentary film, titled Curse of the Axe, to be screened for the first time Monday at the Royal Ontario Museum and broadcast nationwide July 9 on History Television.

The documentary details the quest by Toronto-based archeologist Ron Williamson and his colleagues to identify the composition and origin of the metal artifact and determine how it might have wound up so far inland — at least 1,500 kilometres west of any 16th-century European whaling or fishing station on the Atlantic coast — at such an early time in Canadian history.

The Mantle site is described by Williamson as "the most complex village ever in northeastern North America." Researchers have recovered tens of thousands of artifacts indicating it was a sprawling settlement with dozens of longhouses and a fort-like palisade, all surrounded by cornfields used to feed as many as 2,000 Huron inhabitants for several decades beginning around 1500 A.D.

Historians believe the first contact between Europeans and the Huron tribes of the Great Lakes didn't occur until around 1615, when French explorer Etienne Brule — an important scout and liaison with First Nations for Quebec City founder Samuel de Champlain — reached Lake Ontario.

The film chronicles the researchers' high-tech testing of the metal object, which confirms it came from Europe. A telltale mark on the iron artifact points even more precisely to the Basque Country of modern-day Spain as its place of origin — a logical link, given the well-documented presence of Basque whaling operations at Red Bay, Labrador, in the early 1500s.

Williamson's team hypothesizes that the iron piece might have been traded by Basque whalers to members of a native group on the East Coast of Canada, who subsequently traded the metal westward until it was acquired by the Hurons of the Mantle village.

The "standard line" in contact-period history around the Great Lakes is that "you don't really begin to see European objects until the 1580s," Williamson told Postmedia News in an interview about the discovery.

"When the object appeared on my desk," he said, his initial thought was that it "must be related to a later occupation of the site" — a 19th-century farming operation.

But Williamson said the archeological context was "tight," indicating the object was found at a depth clearly associated with the Huron village of the early 1500s, and buried in what appeared to be a deliberate, ceremonial fashion in a place reserved for "prized or unusual objects."

Although the Hurons would have been familiar with copper objects that had long been used by First Nations of that era, an iron implement would have been unknown to Great Lakes tribes in first decades of the 16th century — just as knowledge of French, English and Basque newcomers from Europe was spreading throughout the continent.

"If you imagine folks living in this area at 1500 A.D., they're certainly aware that there are others on the coast, and that those others represent the edge of the world," said Williamson. "They've seen native copper . . . but they've never seen iron.

"You can imagine the discussion among the people inhabiting the (Mantle) site about this very strange object, and a decision being made to bury it."

The "curse" of the film's title refers to what the iron artifact represents in the history of the Huron nation and other North American aboriginal groups of the 16th century — all of which faced tremendous and often tragic upheaval with the arrival European explorers, settlers, technologies and diseases.

The Huron peoples from the Mantle site near Lake Ontario later moved north to the Georgian Bay area before their descendants moved to the Quebec City area. The present-day Huron-Wendat First Nation at Wendake, Que. — whose leaders are featured in the documentary examining the iron artifact — see the arrival of the object at Mantle as a "foreshadowing" of the momentous changes that would soon befall their nation, said Williamson.