Summer is so exciting: archaeological digs are in full swing and new sites are unearthed almost daily. Here is a very important Viking find from about the 8th century. Check it out if you've an interest in the lore of the medieval Vikings, more will be forthcoming. (Ed.)

***
Archaeologists may have found the fabled Sliasthorp.

A battle-scarred, eighth-century town unearthed in northern Germany may be the earliest Viking settlement in the historical record, archaeologists announced recently.

Ongoing excavations at Füsing (map), near the Danish border, link the site to the "lost" Viking town of Sliasthorp—first recorded in A.D. 804 by royal scribes of the powerful Frankish ruler Charlemagne.

Used as a military base by the earliest Scandinavian kings, Sliasthorp's location was unknown until now, said dig leader Andres Dobat, of Aarhus University in Denmark.

Whether it proves to be the historic town or not, the site offers valuable insights into military organization and town planning in the early Viking era, according to the study team.

Some 30 buildings have been uncovered since excavations began in 2010. Aerial photographs and geomagnetic surveys indicate about 200 buildings in total.

Chief among them is a Viking longhouse measuring more than a hundred feet (30 meters) long and 30 feet (9 meters) wide.

The longhouse's burnt-out remains seemingly bear witness to a violent attack: Arrowheads found embedded in its charred wall posts suggest the communal building was at some point set on fire and shot at, Dobat said.

A caltrop—a type of small, spiked iron weapon that was scattered on the ground for the enemy to step on—was also found at the entrance.

"Maybe [the attackers] even laid out caltrops so people running out of the burning building would run into them," he said.

Other finds include precious jewelry, glass beads, and silver coins.

The town is dated to the same period as a nearby fortification known as the Danevirke, a 19-mile-long (30-kilometer-long) system of defensive earthworks built by the Danes in about A.D. 700.

"It's clear from the relation of the site to the Danevirke structure that [the newfound town] was of great military importance as well," Dobat said.

According to the A.D. 804 account, Sliasthorp was used as a base by the Viking king Gøtrik—also known as Godfred or Gudfred—who repaired and reestablished the Danevirke in the early 800s due to the threat posed by the northward-expanding Frankish Empire.

"That's exactly the time that Scandinavia gets on the radar" of the Frankish scribes, Dobat noted.

Though the town itself wasn't fortified, the site is surrounded by water and wetlands, so access was limited to a narrow land bridge.

Small wood-and-earth dwellings, or pit houses, at the site may have served as accommodation for Viking fighters, Dobat added.

"At times it might have been a temporary garrison town," such as when the Danevirke had to be defended, he said.

The town may also have accommodated workers who built the huge Danevirke fortification.

"It was a major construction work, which involved massive investment of human resources," Dobat said.

From the town, Viking kings or their chieftains would have controlled trade and access to the region, the study team suggests.

Hedeby, an international port and trading center in Viking times, lay just 2.5 miles (4 kilometers) away. While the Füsing site is Scandinavian in character, the buildings down the road in Hedeby are German and Slavonic in style.

"We have the international traders and craftsmen at one place, and the Scandinavian elite a few kilometers away," Dobat said.

The excavations are "giving us a lot of new perspectives on the character and anatomy of these early urban communities," Dobat added.

Mads Dengsø Jessen, of the National Museum of Denmark in Copenhagen, added that the new discoveries are important to understanding the development of Viking-era trade centers like Hedeby.

"Prior to these excavations, we didn't really know what the background was to these rich cities," said Jessen, who isn't part of the study team.

The Füsing site shows "there's actually a significant settlement before the ports of trade start to gain significance," he added. "There is a very deep local foundation for these international ports."

"Local chieftains would control the area," he said. "There might have been some sort of taxation or rent that the traders paid to them."

As for whether the newfound site is Sliasthorp, Jessen urged caution—but conceded it's "the best candidate we have for now."

The reverse, inverted L-shape of Rathlin Island is seen in this NASA photo: the island is located off the Northern Ireland coast and is the most northerly inhabited island in Ireland. It is also the site of the first documented Viking raid-794-in Ireland. (Ed) 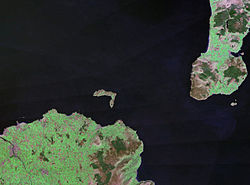 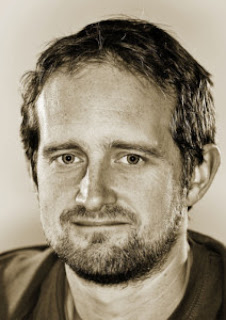 Dr Wes Forsythe, of the University's Centre for Maritime Archaeology at Coleraine, who led the project.

A FIVE-YEAR survey of Rathlin’s archaeology by a University of Ulster team has shed important new light on the island’s earliest prehistoric human inhabitants.

Dr Wes Forsythe, of the University’s Centre for Maritime Archaeology at Coleraine, who led the project, said the quantity and quality of flint tools and ceramics unearthed during the survey have greatly exceeded the investigators’ expectations.

The survey, which was sponsored by the Northern Ireland Environment Agency (NIEA), is the most comprehensive ever undertaken into the archaeology of Rathlin Island.

In addition to the survey’s fieldwork on the island, researchers investigated artefacts that are held or documented in other museum collections on both sides of the Irish Sea

Dr Forsythe, speaking ahead of the launch of a major book that records the findings, said the survey located a number of prehistoric sites that had never previously been recorded. They vary in size, with the largest marking the location of a hut or enclosure.

‘Rathlin Island: An Archaeological Survey of a Maritime Landscape’, whose principal authors are Dr Forsythe and his University colleague Rosemary McConkey, will be launched at a ceremony on the island tomorrow (Friday).

The event is due to be attended by Leo O’Reilly, Permanent Secretary, Department of the Environment and Michael Coulter, Director of NIEA’s Built Heritage directorate.

The extensively illustrated volume describes new evidence about Prehistoric and Medieval settlement and later aspects of island life such as the kelp industry, fishing and agriculture, landing places and the numerous shipwrecks located in Rathlin’s notoriously dangerous waters.

Finds included a huge haul of flint tools, polished axe-heads, pottery, a bronze finger-ring and lignite jewellery. The survey has bolstered recent archaeological findings that Rathlin’s human habitation dates to the Mesolithic period around 5,500 BC, which is at least 1,000 years earlier than previously thought.

Dr Forsythe, who is a maritime archaeologist and lecturer, said of one major Mesolithic site: “Finding a flint in north Antrim is not surprising in itself but finding hundreds of worked flint tools in one area, scattered across three fields that we chose at random because they had just been ploughed for Spring seeding, is pretty remarkable anywhere. Rathlin had a real richness of prehistoric finds.”

Post-holes detected inside one cave during excavation are thought to be the first such examples in these islands. The discovery is important because it indicates the erection of a structure on poles, perhaps a protective screen or windbreak – an aspect of early human activity in caves not previously found here.

Dr Forsythe said: “For archaeologists, Rathlin has always been something of an enigma. It is always throwing up things that disrupt the pattern of how we understand prehistory, and it’s still doing it. I don’t think there is a parallel anywhere in Ireland or Britain for post-holes inside a cave.”

The Vikings’ first documented raid in Ireland was on the monastery at Rathlin in 795 AD and Dr Forsythe hopes that future excavation might unearth another link with the Norsemen, at a spot known as “the Dane’s Burial” in the north of the island.

“It is possibly a very rare example – and it would need to be tested by excavation – of a Viking ‘boat burial’. The site looks as if it has been damaged some centuries ago, maybe by people looking for gold in it. Nevertheless it is a mound which is boat-shaped, and which was never recognised before this particular survey.”

The project was the second in a programme of CMA-NIEA surveys around the Northern Ireland coast, the first of which was a survey of Strangford Lough.

As well as its historical importance, the survey will serve a modern practical function for the NIEA by being a data resource for consultation in the event of planning development applications on the island.

An artist’s conception shows how the burial may have originally looked.
(Sarah Paris)

A spectacular Viking boat burial was uncovered this year on the coast of Ardnamurchan, a remote region of western Scotland, the first such burial to be found on the British mainland. The Viking, who is thought to have perished over 1,000 years ago, was most likely a high-ranking warrior. He was buried lying in a 16-foot-long boat, with artifacts including a sword with silver inlay on the hilt, a shield, a spear, an ax, and a drinking horn. “The level of preservation of the objects and the range of grave goods make this one of the most important Viking burials found in the U.K.,” says Colleen Batey, a Viking specialist from the University of Glasgow.

Although the location is isolated today, at the time of the burial, it was right on the main north-south seafaring route between Ireland and Norway. No Viking dwellings have been found in Ardnamurchan, but Vikings are known to have inhabited the nearby islands of the Hebrides. “We don’t know why they chose this location for the burial, but the Neolithic and Bronze Age burial mounds there may have made it an important place for them,” says Oliver Harris, project co-director from the University of Leicester. Isotope analysis of the Viking’s teeth may eventually help the scientists pin down where he was from.