Discovered this past summer in Northern Ireland during construction of a new roadway, this crannog site (Crannog - an artificial island in the middle of a lake; found throughout Scotland and Ireland) promises to yield a wealth of Norse and medieval Irish artifacts from approximately 900AD. (Ed.) 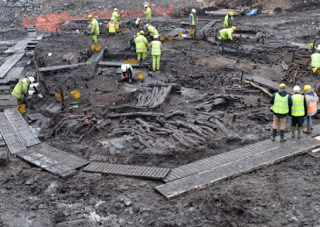 The site of the Drumclay Crannog in Fermanagh


Published on Thursday 29 November 201221:15
Pieces of a medieval board game and 1,000-year-old combs are among rare artefacts uncovered during an archaeological dig that is set to rewrite the history books.
Experts have hailed the finds in Co Fermanagh as internationally significant, claiming they shed new light on life in medieval Ireland and its connection with the wider world.
Iron, bronze and bone ornaments have been discovered at the crannog just outside Enniskillen, along with the chess-like pieces believed to have been part of the game.
Parts of log boats, leather shoes, knives, decorated dress pins, wooden vessels and a bowl with a cross carved on its base have also been unearthed during the six-month dig.
The style and design of the antler and bone combs suggest influences from northern Europe and indicate that the Fermanagh settlement had international links 1,000 years ago. 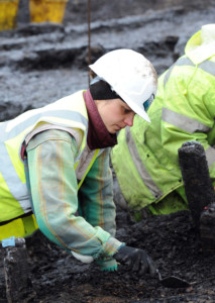 The Drumclay Crannog, which is an artificial island built in a lake, is the first of its type to be excavated in the north of Ireland since 1870.
Archaeologists believe people may have lived there from 600 AD to 1600 AD, and it was probably the home of a noble family, with perhaps four or five houses inhabited at any time. Parents, grandparents, children and servants would all have stayed on the crannog.
The artefacts uncovered so far date back to 900 AD but there are still a number of layers of settlement yet to be excavated.
Stormont Environment Minister Alex Attwood visited the site today and announced plans for an open day this Saturday to allow the public to tour the crannog and talk to the archaeologists. 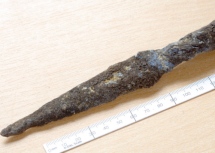 “On my two visits to date, I have found the site, the dig, and the archaeology beyond my imagination, enormously exciting and changing my view of our history and Irish life,” he said. 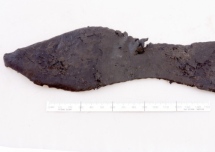 “This is the first substantial scientific excavation of a crannog in Northern Ireland. What has been found has the potential not only to be internationally important but ultimately to lead to a reassessment of life in Ulster in early Christian and medieval times.”
The site was excavated during the construction of a new road on the outskirts of Enniskillen.
Mr Attwood placed a temporary exclusion zone on the area to facilitate the dig, which is due to finish at the end of December.

Dr John O’Keeffe, principal inspector of historical monuments with the Department of the Environment, explained that the site is right in the middle of the proposed route of the Cherrymount Link Road.
He said all the remains from the dig site would have been removed before construction work advanced.
“By the time the archaeological work is finished the site will not be here anymore,” he said.
Dr O’Keeffe said scientific advances made in the 140 years since the last time a crannog was excavated in the north had facilitated a greater understanding of life in such a settlement. 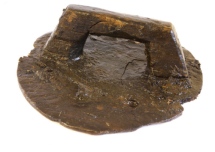 “It has enabled us to find out much more about diet, economy, agriculture and social structures here,” he said.

The expert said many of the finds had been unexpected and were similar to those unearthed at Viking sites in Dublin and York.
Some of the wooden artefacts have survived 1,000 years or more as a result of being submerged in water.
The settlement at the crannog has provided new evidence of living conditions in medieval Ireland.
It shows people lived in houses that would have been little bigger than a large modern living room, cooking and sleeping in the same space.
The walls were insulated with heather and other plants.
The objects found indicate that people were very sophisticated in their tastes, living as farming families, butchering their own animals and ploughing the land for crops.
They were very skilled at metalworking and woodworking, excelling at carpentry to construct the houses and crafting and decorating wooden containers of all sizes.
They played board games probably around the fire on cold evenings.
They wove their own cloth, having spun the wool from their own sheep.
“Archaeology is a fragile and finite resource,” said Mr Attwood.
“Once sites such as this have disappeared, we can never get them back again. Such sites have the ability to teach us a great deal and we owe it to future generations to rescue and to safeguard what we can.
“It will further enrich the fascinating fabric of our history and I am sure bring even more tourists to our shores. Anyone who visits on Saturday will simply have an unprecedented opportunity to see how our forefathers lived and to see history revealed before our very eyes.”
The minister added: “This is why I felt the need to open this spectacular excavation to the public.
“The Northern Ireland Environment Agency and Fermanagh District Council have been working in partnership to hold this open day between 9.30am and 3pm this Saturday and allow the public this unique opportunity to see the artefacts found, look down on the site of the dig and meet the experts behind this archaeological dig. It is an opportunity not to be missed and one likely not to be experienced in our lifetime again.”
The Drumclay Crannog open day will comprise a series of talks that will take place at the Fermanagh County Museum, followed by a guided tour of the archaeological site.
Access to the site for this tour can only be obtained via an official coach.
Booking is advisable on 028 6632 5000 or 048 6632 5000 in the Republic of Ireland.
Posted by J A Hunsinger at 09:34 No comments: