Each generation of archaeologists have a new challenge - find something nobody else has found about the Viking Age or refute something that has been regarded as sacrosanct for centuries - and that is the case here. Is it true? Only God knows the answer to that one. You be the judge. (Ed.)

By Josephine Lethbridge, The Conversation

The could have been inhabited 500 years earlier than was previously thought, according to a startling archaeological discovery.
The islands had been thought to be originally colonised by the Vikings in the 9th century AD. However, dating of peat ash and barley grains has revealed that humans had actually settled there somewhere between the 4th and 6th centuries AD.
The Faroes were the first stepping stone beyond Shetland for the dispersal of European people across the . The findings therefore allow speculation as to whether , , and even were colonised earlier than previously thought. 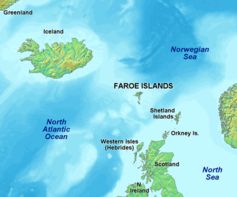 Mike Church from the said he and his research partner, Símun V Arge from the of the , had not expected to find such evidence.
“Símun and myself sampled the site in 2006 to take scientific samples for environmental archaeological analysis from the medieval Viking settlement,“ he said.
“We uncovered some burnt peat ash containing barley grains under the Viking longhouse. It was not until we had it dated that we realised what we had found.”
It was a common practise across the for peat to be burnt for warmth, before being spread on fields and grasslands to improve soil stability and fertility. Barley is not indigenous to the Faroes and so must have been either grown or brought to the islands by humans. Their findings are therefore conclusive evidence that the Faroes were colonised in pre-Viking times. 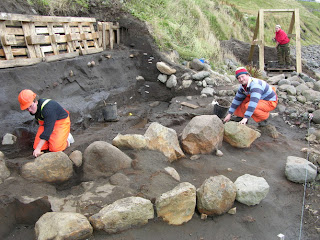 Archaeologists revealing the wall of a Viking longhouse.

Andrew Jennings, a Nordic historian at the University of the and , said the theory of pre-Viking settlement was not new. “Christian Matras, for example, was convinced there were pre-Viking settlers in the 1950’s. He believed there were old field systems that didn’t seem to tie into later settlements. But he had no evidence.”
It is unknown, as yet, whether these mysterious settlers hailed from the or .
“There is evidence of Irish hermits sailing into the islands in a passage by an Irish Monk called Dicuil in 825AD,” Church said.
The passage from Dicuil’s geographical book describes islands that don’t turn up in any other writing of the time:
Many other islands lie in the northerly . One reaches them from the northerly islands of , by sailing directly for two days and two nights with a full sail in a favourable wind the whole time … Most of these islands are small, they are separated by narrow channels, and for nearly a hundred years hermits lived there, coming from our land, , by boat.
described how the identification of the Faroes in the text was a subject of debate. “However, it now seems pretty conclusive that Dicuil was referring to the Faroes.”
However, Church stressed that their findings are not necessarily tied to these voyaging Irish monks. “Our findings indicate even earlier colonisation, and more research is needed before any conclusions as to the origin of these settlers can be drawn. We would need to find evidence of the type of settlement to compare to those we know about in that period before forming any opinions on this matter.” 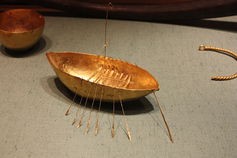 The uncovering of this further evidence, however, may be a way off. The evidence is “very ephemeral, and very hard to find,” said Church. This means that future research in the area will be time-consuming and difficult. There are only a few places that allow settlement in the and when the Vikings did settle there, they destroyed any structural evidence that there may have been.
Despite this, is confident that the settlers derived from the . “I personally would think that any pre-Viking settlers in the Faroes would have come from the or Shetland rather than ,” he said.
“The civilisation in Shetland at the time was Pictish, and had boats. There is also good evidence that they had sails: there is a model boat from Ireland that dates from about 100 BC that has a mast, which could be a model for Celtic boats more generally.”
“There is not so much evidence of sails in until as late as 700 AD. It is therefore more likely that these early Faroese settlers came from the .”

Sagas of the Vikings, Truth or Fiction

Norse sagas are generally acknowledged to be written versions of the oral tales of the medieval Norse people. I make no attempt to cover any saga in detail, for that is not my purpose. Reference is made to both the Vinland Saga and the Saga of the Greenlanders. Except where noted the content of this article are my own opinions and observations from many years of research into the lives of the Greenland Norse.

While the sagas are certainly entertaining, they cannot be regarded as factual representations of actual exploration or settlement on the North American continent, the islands of Greenland and Iceland, or anyplace else that the Norse visited in the western hemisphere. Why, because the explorers themselves did not write the saga about their purported deed. Let me say that again, the Norse explorers, or characters of the story played no part in writing the saga, any of them. Not a single document originating in is known to exist.  Excerpted from Dr. Birgitta Wallace, Archaeologists Interpretation of the Sagas, 2000, P-225. The sagas are a body of verse, albeit fanciful verse, or medieval Norse literature if you prefer. But history, I think not.

The and sagas were written as long as 200 years after the facts they portend to portray. In most cases the authors lived long after the “disappearance” of the settlers from , and they were writers who had never been to . Some were not even of Norse extraction. One such case, a man responsible for centuries of misconceptions, Adam of Bremen, a German cleric of the 11th century, wrote a four-volume treatise on the Norse, or Vikings as history has dubbed them. Volume IV deals specifically with and . It is his reference to “the profusion of grapes and self-sown wheat” found in that has perpetuated the myth of grapes and grain. In fact grapes have never grown north of the 45th parallel at any time in history - and - and the wet weather of the Canadian Maritimes will not support the growth of wheat. Excerpted from, The Quest for , Gisli Sigurdsson, 2000, P-234. So, since wheat and grapes have never grown where Adam says they did, what is he talking about? Not much of substance. He is telling a tale that has been accepted as gospel for centuries, up to and including the present time, from a religious standpoint, that will not hold up under scrutiny.

Psychiatrists have long held that memory consists of things held in memory from the time of the event but which have been mixed with information acquired later. The greater the time lapse from the actual event to the recollection of that event, the more learned material will be mixed with original material so that the disparity between reality and what is remembered will become distorted until the memory is no longer truthful. Excerpted from an article in Confederate Veteran, Dr. Michael R. Bradley, July/August 2013, P-18. We are referring to fireside stories of exploration and sea voyages, tales of valiant warriors, heroes and mythological gods that come to us from a culture that existed 1000-years ago. That is 40-generations ago, in round numbers, in a period of history when few common men were literate in any sense. Collective memories were transmitted verbally. Now we are asked to believe that these memories, unscathed by the passage of some 200-years of time, were written down in a body of prose we now know as the Norse Sagas. It is little wonder that many of the places mentioned in these sagas have not been found.

Many scholars and authors have spent a large portion of their lives, translating, codifying, parsing, and publishing their opinions on the sagas. Most have mentioned that many of the place names and areas portrayed have never been found. There is a reason for that, they do not exist. Read the sagas for what they are, verbal stories carried in the collective memories of men and women that lived centuries before their deeds were written down by writers that knew nothing about what really happened. The sagas are historical flights of fancy, nothing more.

I received the completed cover image design for the final book of my Axe of Iron series, Assimilation. The cover designer, Debi DeSantis, Wild Orchid Cover Designs, used original art entitled, Huron Daily Life, by Lewis Parker, one of Canada's most famous illustrators of pre-historical Indians.
Readers who have followed my Axe of Iron series know that Assimilation is the culmination of this historical fiction tale about the Greenland Norse people joining the natives of Vinland to both survive and prosper in the savage new land that they call home.
Email me what you think of this beautiful scene as Assimilation's cover image. Included after the cover image is the full painting by Lewis Parker.(Ed.) 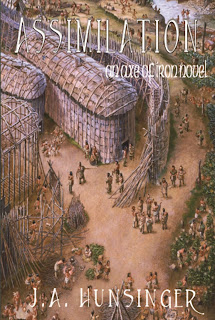 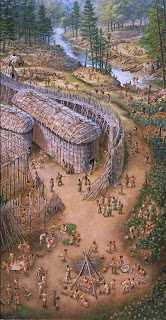 Huron Daily Life, Lewis Parker
Posted by J A Hunsinger at 10:45 No comments: