New evidence of Dingwall's Viking past to be revealed

The topic of this article from News is the discovery of a Thing site in the town of , at the head of Cromarty Firth in northeastern , . Dingwall, from the Norse Þingvöllr, meant meeting place, hence the meeting place of the Norse Thing. This area is rich in Viking history and many discoveries have been made in the area. For readers who may not know the definition of a Norse Thing, I offer the following from the Glossary of my novel, The Settlers, the first book in my Axe of Iron series on the Vikings of .

Thing—The h is silent, thus literally Ting. An annual
assembly that served as the governing body of Norse society
and at which any Freemen could bring their concerns before
the chieftain, or lawspeaker, for the rule of law. Although
women could be heard at a thing, they had no vote.
(Ed.)
***
Last updated at
New evidence of Dingwall's Viking past to be revealed 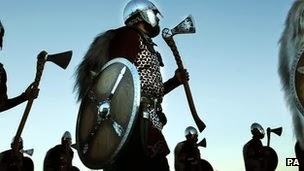 New evidence confirming Dingwall's origins as a Viking power base are to be revealed at a public meeting in the Highland town later this month.
Dingwall's Cromartie car park is believed to be the site of a "thing", the meeting place of a medieval Norse parliament. Archaeologists excavated part of the car park last year.
A report on the dig, including the results of radiocarbon dating, will be presented at the meeting. Highland Council said some "exciting answers" to questions about the town's Viking past will be revealed. Ahead of next Wednesday's event, local councillors said in a joint statement: "Tracing our Viking past is one of the most exciting things that has happened in Dingwall. "The archaeological investigation well and truly put Dingwall on the map."
Dr Oliver O'Grady of OJT Heritage, which was commissioned by Dingwall History Society to dig a trial trench in the car park, will give a report on what the excavation uncovered. Another of the speakers will be David MacDonald who was commissioned to put together a historical investigative report on Dingwall as a Viking thing site.
A new book, Things in the Viking World, edited by Olwyn Owen, will also be launched at the meeting.
Treasure hunt
Dingwall is a location on a European tourist trail of thing sites. Funded by the EU, the Thing Sites GeoTour involves , , , the Faroes and Isle of Man. It has been described as a treasure hunt in which visitors use and mobile phone apps to uncover details about the locations.
In , thing sites can also be found in Shetland and Orkney.


The Dingwall event will be held in Highland Council's High Street office from .
Posted by J A Hunsinger at 10:34 No comments:

The following article detailing the discovery of more than 400,000 artifacts dating to 1100 A.D. is the largest archaeological find of such materials ever located in the Canadian . The pre-historical aboriginal peoples represented by this treasure trove may be the ancient ancestors of the Anishinabeg (Ojibwa/Chippewa) people that I introduce in the 2nd novel, Confrontation, of my Axe of Iron series of historical fiction novels about the assimilation of the Vikings with the natives of .
I have highlighted two areas of the article to call attention to the end of the period represented by the materials found at the site. Pottery never before seen has been dated to approximately 1100 A.D., yet the archeologists never mention possible Norse influence in that revelation. I find that omission amazing because the Norse certainly could have played a part in introducing new techniques to the pre-historical natives of . (Ed.)

WINNIPEG, MANITOBA--(Marketwired - Aug. 28, 2013) - The Canadian Museum for Human Rights (CMHR) today released the official reports of archaeological excavations conducted on its building site, revealing important new evidence about the role of The Forks among early inhabitants.
"These new findings may lead archaeologists to rethink current theories about how The Forks has been used over thousands of years," CMHR president and CEO Stuart Murray said at a news conference attended by archaeologists, Aboriginal Elders and other site partners. "Evidence that this site has long been a place for peaceful meeting also supports Aboriginal oral history passed down through generations."
More than 400,000 artifacts dating as far back as 1100 A.D. were recovered from the CMHR digs, conducted in two stages between 2008 and 2012 by Quaternary Consultants, led by senior archaeologist Sid Kroker, and by Stantec Consulting, led by senior archaeologist David McLeod. The first stage was the largest block archaeological excavation ever conducted in .
This spring, the CMHR presented the archaeological results to the annual conference of the Canadian Archaeological Association and to Aboriginal Elders at Thunderbird House in . Among the significant findings were:
Elder Clarence Nepinak, who offered a traditional blessing before an Aboriginal water ceremony at today's news event, said Anishinaabe oral traditions speak of a very large peace meeting about 500 to 700 years ago at The Forks among seven to 11 different Aboriginal groups. Archaeologists agree that such a meeting would match the timeline of the site, and could explain some of its artifacts and assemblages.
More information can be found on the CMHR Web site and blog. The full reports, totaling over 1,600 pages, are posted on the Bibliography page of The Forks Heritage Research Web site alongside reports from other archaeological work at The Forks.
The total cost of the CMHR archaeological excavations was approximately $1 million. Artifacts from the 2008 Quaternary dig now reside with the Historic Resources Branch, Manitoba Culture, Heritage and Tourism (). Discussions are currently underway with regarding future custody of the artifacts from the Stantec mitigation as well.
Partners in the project included Aboriginal elders who provided advice and conducted ceremonies on site and with some of the recovered artifacts; Parks Canada, which provided advice and consultation, helped fund residue analysis and radiocarbon dating, supported a public information project called "Footprints Through Time", and offered a public interpretive program at the dig site in 2008; Historic Resources Branch of the Province of Manitoba, which issued a heritage permit for the 2008 excavation and established terms of reference in consultation with Parks Canada for both projects; the University of Winnipeg's Department of Anthropology, which provided data-base management; Friends of the CMHR; and Constructors Canada Inc.
Currently under construction in , the CMHR is the first museum solely dedicated to the evolution, celebration and future of human rights. It is the first national museum to be established in since 1967 and the first outside the National Capital Region. It opens in 2014.
More information about the CMHR archaeology project
Maureen Fitzhenry
CMHR media relations manager
(204) 289-2112
Cell: (204) 782-8442
maureen.fitzhenry@museumforhumanrights.ca