According to this article, archaeologists have found the probable site of a medieval Thing in a parking lot in . You might ask, what is a Thing? “An annual assembly that served as the governing body of Norse society and at which any freeman could bring their concerns before the chieftain, or law speaker, for the rule of law. Although women could be heard at a Thing, they had no vote.”  From Glossary of Norse Terms, The Settlers, An Axe of Iron Novel.
For those of you interested in such things - no pun intended – further reading on this subject and the recently discovered Viking site may be found at: http://www.thingsites.com/thing-site-profiles/dingwall-scotland (Ed.)

A Fragment of an iron vessel was found during the excavation

Archaeologists say they have confirmed the location of a meeting place of a medieval Norse parliament.
Called a "thing", evidence of the mound was uncovered during excavations of Dingwall's Cromartie Memorial car park. When it was constructed in the 11th Century, the thing would have been on a man-made islet in the estuary of the Peffery.
Archaeologists and historians believe it was built on the instructions of Thorfinn the Mighty.
The powerful Viking earl, who died in 1065, is thought to have laid the foundations of what would later become the royal burgh of Dingwall in Ross-shire.
Experts suggest a road, ditch and an aqueduct, known as the Water of Dyke, that drew water from hillside springs were also constructed when Thorfinn was in control of Ross-shire and large parts of the north of . 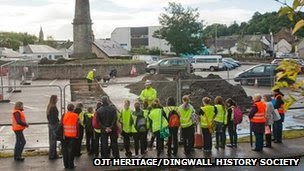 Thorfinn's rise to power was aid by his victory in a battle at Torfnes on the south side of the Cromarty Firth. At the height of his power he was lord of , Shetland and Orkney.
Estuarine mud
In , thing sites can also be found in Shetland and Orkney. Clues to the location of Dingwall's thing included an 18th Century plan of the town. OJT Heritage and Dingwall History Society were involved in excavating parts of Cromartie Memorial car park, which is on a piece of land known as the Hillyard. 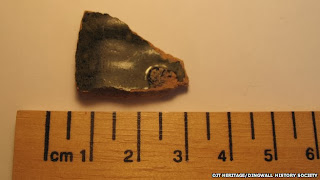 Imported medieval pottery were also found during the dig
David MacDonald was commissioned to put together a historical investigative report on the thing site. In his report, he said: "The excavation revealed that what had been a large earth mound contained within the Hillyard of Dingwall had been located within estuarine mud. This confirmed George Brown's plan of 1790 showing the Hillyard as an estuarine islet."


Radio carbon dating of earth samples indicated that the mound had been constructed in the estuary of the Peffery around the mid-11th Century. Mr MacDonald added: "That dating is consistent with the period in which, following his victory at Torfnes until his death, Earl Thorfinn the Mighty had exercised authority over Ross. It therefore reasonably can be concluded that the mound had been constructed on Thorfinn's instructions to be a man-made islet adjacent to the eastern shore of what historically had been a small peninsula projecting into the estuary of the Peffery."
Posted by J A Hunsinger at 14:07 No comments: