The fascinating aspect of this short article, is that the object pictured below is made of wood, yew to be specific, and it is more than 1000-years old. It has been identified as a weaver's sword, used to tighten each run of yarn on the loom.

As you see from the accompanying photos, the object is virtually in pristine condition, as though it was made recently. It was found in what became an archaeological site in Cork, Irish Republic. (Ed.)

A 1,000-year-old perfectly preserved Viking sword has been discovered by archaeologists at the historic site of the former Beamish and Crawford brewery in Cork city.

The wooden weaver’s sword is just over 30cm in length, made entirely from yew, and features carved human faces typical of the Ringerike style of Viking art, dating it roughly to the late 11th century.

Consultant Archaeologist Dr Maurice Hurley said it was one of several artefacts of "exceptional significance" unearthed during recent excavations at the South Main Street site, along with intact ground plans of 19 Viking houses, remnants of central hearths and bedding material.

"For a long time there was a belief that the strongest Viking influence was on Dublin and Waterford, but the full spectrum of evidence shows that Cork was in the same cultural sphere and that its development was very similar," he said.

"A couple of objects similar to the weaver’s sword have been found in Wood Quay, but nothing of the quality of craftsmanship and preservation of this one," Dr Hurley said.

He added that it was "quite miraculous" how the various wooden items had survived underground in such pristine condition.

"The sword was used probably by women, to hammer threads into place on a loom; the pointed end is for picking up the threads for pattern-making. It’s highly decorated - the Vikings decorated every utilitarian object," he said. 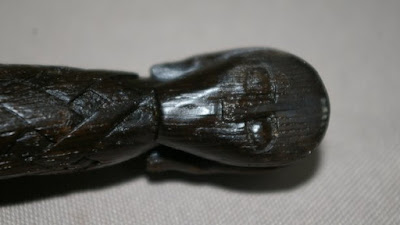 One of the other artefacts found was a wooden thread-winder carved with two horses’ heads, also associated with fabric weaving.

The Viking remains were found in May, but only came to light last Tuesday following an informal visit to the Cork Public Museum by the Norwegian Ambassador to Ireland, Else Berit Eikeland.

"The visit did not coincide with any official or diplomatic event, but came about due to the Ambassador’s deep personal interest in the Vikings," said Museum Curator Daniel Breen said.

The eight-month archaeological dig led by Dr Hurley finished in June, but developers BAM Ireland have not given any indication yet when building might begin or end at the site.

A spokesperson for BAM said the company had been delighted to be able to facilitate and fully fund the archaeological excavations, thus adding to the medieval heritage of Cork city.

The Viking Shield in the British Isles

The reader might think that a dissertation on the shields of the Viking warriors could be covered in a few short paragraphs. Nothing could be further from the truth.

This excerpt, featured on Medievalists, comes to us from a master's thesis on that very subject, and the author conveys everything known about the Viking shields, as well as much else gleaned from her research.

I encourage the interested reader to click the link at the end of this excerpt, to be taken to Academia.edu, where you may read this very interesting thesis in its entirety. (Ed.)

The Viking Shield in the British Isles: Changes in use from the 8th-11th Century in England and the Isle of Man

The Viking Shield in the British Isles: Changes in use from the 8th-11th Century in England and the Isle of Man 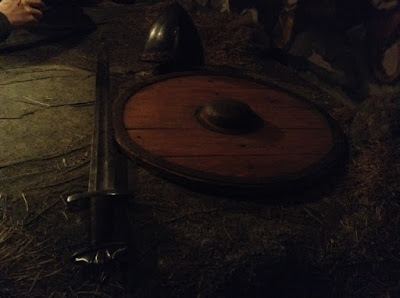 Abstract: This investigation into the study of the Viking shield will include analysis and interpretation of archaeological material, from England and the Isle of Man, with wider parallels being drawn upon from the Scandinavian homelands. Historical evidence from Saga’s and historical accounts for this period will be used to enhance the vibrancy of the Viking shield and show the role of it as a symbolic object within Viking Society.

This is an ever evolving topic of study and it has opened up new areas for investigation as well as the potential for further cataloguing and re-evaluation of Viking age archaeology throughout the 8th-11th centuries.

Introduction: The Viking shield although a very iconic object, it is an item which has not received the same kind of artefact analysis in recent years as maybe some other objects have from the Viking Age. The studies done on Viking Age combs have enabled a greater understanding on manufacture, trade and exchange. The extensive artefact analysis of tortoise brooches and keys at Ribe, Denmark has shown the qualities of Viking age craftsman but also enabled good chronologies and distinct typologies to be developed.

Featured this week is an interesting article about the largest Viking longhouse ever discovered in Scandinavia. Located in northern Norway, near the hamlet of Borg, Lofoten Islands, it is believed that the longhouse belonged to local chieftain. At 272' in length, the longhouse, constructed to resemble an inverted long ship, is unlikely to find an equal anywhere in the Viking world.

As you may know, the Vikings were believed to use their inverted ships as shelters, rather than build houses, when the gods Njord and Thor brought winter to the land in which they found themselves. (Ed.) 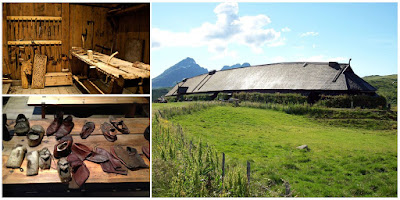 In 1983, a joint Scandinavian research project was conducted in the small village of Borg, near the center of Vestvågøy, in northern Norway. During the excavation, researchers discovered a Viking building that belonged to one of the chieftains. It is believed to be the largest ever found. The 272-foot-long house was the seat of one of the chieftains, and it is the only such building found as of now.

In the 1990s, the residence was reconstructed in order for it to become part of the Lofotr Viking Museum. Historians believe the building was raised around 500 AD and abandoned around 950. The last chieftain who lived in the house was probably Olaf Tvennumbruni, who moved to Iceland because of a conflict with the other chieftains.

These events are described in a book called the  Lándnáma Bok.  It is believed that it was written around the 12th or 13th centuries, and the book describes the colonization of Iceland, including Tvennumbruni as one of the settlers from Lofotr (which is the medieval name for “Vestvågøy”). There is a detailed description of his family in the book, saying that he had three sons and he was married to Ashild.

Today, as part of the museum, the house is a major attraction for visitors to enjoy traditional Viking food, see a precise reconstruction of two Viking ships, visit the blacksmith’s forge, and learn craft skills. The most enjoyable part is that, unlike other museums, people can touch the artifacts and every other object inside. Some guides are dressed as Vikings from 1,000 years ago and walk visitors through this amazing historical experience.

The banquet hall, which is shaped like an upside-down boat, is reserved for traditional food, as well as singing and dancing. In the summer a Viking ship, which is a full-scale replica of the Gokstad ship from the 9th century, can carry 90 people on the water. Close to Gokstad there is a smaller ship, and together they are known as Vargfotr and Lofotr. The museum also has a large barn, living quarters, and a storeroom for grain.

The interior of the living quarters is made to look as it might have in the year 800. Between the farm and the house, a sunken smithy was restored in 1997. Here, visitors can watch a demonstration of a Viking blacksmith’s craft and learn how the Vikings produced iron and charcoal. The barn was used to keep the animals warm through the winter, and today, various animals can be seen around it, including wild pigs, horses, and sheep.

Related story from us: New initiative underway to reconstruct a Viking ship built in Norway in 900 AD

Every August, there is a Viking festival in the village that lasts for five days and features many “Vikings” from Norway and other countries. During the event, various game shows, markets, competitions, and concerts are held.