The Ancient Swedish Village That Predates the Vikings

Another interesting article from Ancient Origins that details a reconstructed village from the Vendel Period complete with some of the artifacts dug from the site of the original village that dates to 1500-years ago. (Ed.)

Gene Fornby: The Ancient Swedish Village That Predates the Vikings

Located just outside Örnsköldsvik in northern Sweden, Gene Fornby is a reconstructed archaeological open-air museum based on the finds of an ancient settlement. It became a popular tourist attraction when it opened to the public in 1991 and demonstrates how the village would have appeared during the period of occupation more than 1500 years ago.

The family that lived there lived well, and they had been doing so for generations. Food was plentiful as they farmed the land, and the sea gave them fish and seals. During occupation the water would have reached the edge of the village, although currently the site sits 65 feet (20 meters) above sea level due to environmental changes in the area. The family lived there when iron, bronze and pearls were considered precious goods. They traded with nearby settlements and provided items they made in the smithy. The surrounding forests provided them with timber from which they built their homes, their boats, and made crafts.

Gene Fornby is operated by the Örnsköldsvik Museum & Art Gallery and is open during summer with interpreters and historians dressed in period costume. While education and entertainment are deemed important, both the university and the local museum are still involved in ongoing research.

The area was excavated primarily from 1977 to 1988 by archaeologists from the University of Umeå who found traces of human activity in the area dating back to the Nordic Bronze Age (1700–500 BC), but the settlement itself dates back to the Roman Iron Age and the Migration Period, from around the years 400-600 AD.

The Smithy Was Large Enough To Contain Four Forges
The forge is believed to have been one of the largest in prehistoric Scandinavia. Traces of iron production and processing were uncovered as well as bronze casting refuse, and even a textile workshop. The bronze casting molds for embossed buckles are an unusual type that have only been found at about ten locations throughout the Nordic region, and Genes Fornby is the only known manufacturing site. The archaeological evidence show that an iron industry had been an important part of the settlement.

A cemetery with nine low burial mounds was found in the main excavation area, while four more burial mounds were found not far away. The thirteen burial mounds, thought to be chieftain graves from the years 100 to 600 AD, are of great significance. Contrary to the previous archaeological assumption that there was probably no resident population in the northern parts of Sweden before the Viking Age (792 to 1066 AD), the graves prove Gene Fornby was one of the earliest settlements in this part of Sweden.

Among the artifacts found at the site are knives, arrowheads, bone combs, pottery, clothing buckles and buttons, as well as beads of bronze, glass, bone and clay.  Waste from handicraft production indicates that a great number of objects were made on site.

Gene Fornby spans over two periods - during the first phase there was a longhouse, a barn which held corn, as well as a workshop. Then the second phase started when they demolished the old buildings and built a new longhouse, a barn and also the large smithy.

In total, fourteen houses were found in the excavation area. Thirteen of the buildings belong to the Iron Age settlement, and one house dates to the 1200s.

Found just northwest of the settlement were, among other things, several charred logs, nail like objects, flint flakes and an iron key. Samples of the charred wood have been dated to the Migration Period, which is consistent with the dating of the key.

The Fight For Preservation Lasted Over Ten Years
The site, however, was not without controversy. For many years, the politicians of the City Council of Örnsköldsvik argued over the ‘use’ of Gene Fornby and the site was at risk even though it was marked by The Swedish National Heritage Board as an archaeological location.

After several years of struggle, those who fought for the preservation of the site generated more and more followers and were eventually victorious in 2012. The site was transferred to the Örnsköldsvik Municipality for preservation in 2013.

Eight-year-old pulls a 1,000-year-old pre-Viking era SWORD from the bottom of a lake in Sweden

An interesting article from the Daily Mail tells a story of a young girl's accidental find of a sword that may pre-date the Viking age.

Eight-year-old pulls a 1,000-year-old pre-Viking era SWORD from the bottom of a lake in Sweden 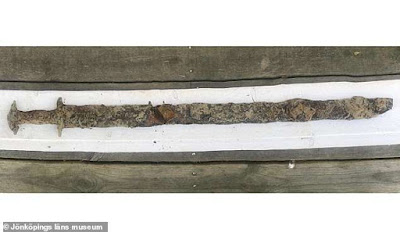 The ancient sword was discovered by 8-year-old Saga Vanecek in Vidöstern lake
The child at first thought she'd pulled out a stick, before realizing it was a sword
Experts estimate it's at least 1,000 years old, likely dating to pre-Viking era
They're now working to preserve it before putting it on display at a museum

By CHEYENNE MACDONALD FOR DAILYMAIL.COM
PUBLISHED: 16:19 EDT, 4 October 2018 | UPDATED: 10:45 EDT, 5 October 2018
An 8-year-old girl skipping rocks at a lake in Sweden earlier this summer made a remarkable discovery that now has many locals joking she should be crowned the new queen, in a nod to tales of King Arthur.

While wading in Vidöstern lake in Tånnö, Småland, Saga Vanecek stumbled upon what she thought was 'some kind of stick' – but, it turned out to be a sword dating back more than 1,000 years to the pre-Viking era.

Experts are now working to preserve the delicate relic before it's eventually put on display at the Jönköpings Läns Museum.

It turned out to be a sword dating back more than 1,000 years to the pre-Viking era.

Though Vanecek found the sword months ago, the news was kept under wraps until this week to give researchers time to scour the area for any other artefacts that could be nearby, according to The Local. And in doing this, they found an ancient brooch from the same time period, as well as an 18th century coin.