The longhouses built in the Norse world were more than just simple structures that served as places of shelter. In many ways they had a life of their own.

Dr Marianne Hem Eriksen spoke on the topic of Longhouses in the Iron and Viking Ages last month at the University Oxford. Currently a visiting research fellow at the University of Cambridge, she is a Norwegian archaeologist researching houses with burial mounds. Erikson argues that the commemorative activities attached to the buried longhouses are not just for individuals who lived there or for those of higher ranks, but they could also be for the houses themselves. After all, the social life and the people who lived in them also make the place full of meaning.

It is these meanings that Dr Eriksen aims to reveal. She is particularly interested in the longhouses’ lives and temporalities, as well as the image of the houses in people’s mind. Her research can be divided into three areas: first, she studies the houses as objects that are related to human personhood and agency; here she also considers the architectural form and materials. Second, she unearths the lives in the house, especially moments of tension and change. Third, she places the longhouses in wider, more networked landscapes and takes into full consideration their roles as part of larger social and political schemes.

Was the Vikings’ Secret to Success Industrial-Scale Tar Production?

It is interesting that archaeologists now theorize that tar, or more correctly pine tar, to differentiate it from petroleum based tar, may have contributed to the success enjoyed by the Vikings and their magnificent ships.

Who will ever know the answer to that one? Nobody!

Not only did all seagoing people use some greasy substance to waterproof their boats and ships, and protect them from the toredo worm (ship worm), the Norsemen specifically used a product readily available in the vast coniferous forests of Scandinavia, pine sap. Heating or cooking the sap and green wood of pine trees will provide you with all the pine tar you might need.

The modern Norwegian Viking ship, Draken Harald Hardrada, the world's largest currently, is sealed with - you guessed it - pine tar, produced in exactly the same manner as that produced by the Vikings more than 1000-years ago. (Ed.)


***
Was the Vikings’ Secret to Success Industrial-Scale Tar Production?

Evidence suggests that the ability to mass-produce tar bolstered their trade repertoire and allowed them to waterproof and seal their iconic longships.


The Vikings are often viewed as brutish, destructive village-pillagers, but their knack for innovation is perhaps overlooked. Viking-age Scandinavia was kind of the Silicon Valley of shipbuilding in the early Medieval period. Their iconic longboat designs, advanced navigational skills, and perhaps even legendary sunstones gave them the ability to raid, trade and establish settlements as far away as Russia, Italy and North Africa. A new study adds another bit of technology to the list of things that gave Vikings a leg up on their adversaries: they may have been capable of making industrial scale quantities of tar, according to a new paper published in the journal Antiquity.

Tar was probably essential to the Vikings’ lifestyle since each longship would have required about 130 gallons of tar to coat all of its wooden elements, the study suggests. Tar was also needed to coat the ships’ wool sails, and the boats would need to be regularly re-tarred between voyages as well. Multiply all that to fit the needs of a fleet and we're talking about a lot of tar here.

Jason Daley is a Madison, Wisconsin-based writer specializing in natural history, science, travel, and the environment. His work has appeared in Discover, Popular Science, Outside, Men’s Journal, and other magazines.
Read more from this author | Follow @jasondaley608

Thor’s Hammer in Iceland – an Interview with Ragnheiður Gló Gylfadóttir

Posted by Wild Hunt in October, an interview regarding a new archaeological find on Iceland. (Ed.) 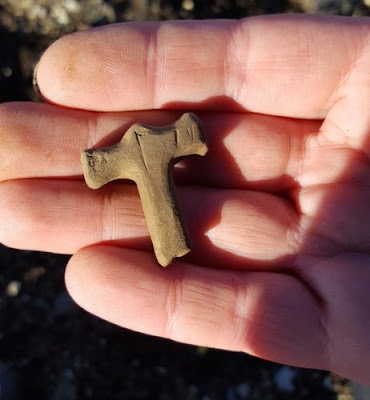 A farmstead from the Viking Age was found earlier this month by a local resident in Þjórsárdalur, a valley in the southern highlands of Iceland.

Bergur Þór Björnsson is the great-grandson of the man who discovered the region’s most recently found Viking-era farm back in 1920. With his new find, the total number of known farms stands at twenty-one.

Archaeologists from Fornleifastofnun Ísland (“the Institute of Archaeology in Iceland”) were called to the scene and soon found several small objects. Among them was a Thor’s hammer amulet, only the second ever found in Iceland. Adolf Friðriksson, director of the Institute, told me that record searches so far suggest that this is the first Mjölnir pendant made of stone found anywhere.