AXE OF IRON: Viking city: excavation reveals urban pioneers not...: Here’s a new approach to who the medieval Vikings may have really been, even though their reputation has already been historically establi...
Posted by J A Hunsinger at 07:23 No comments:


Viking city: excavation reveals urban pioneers not violent raiders
Excavations in Ribe, Denmark show that Viking culture was based on sophisticated production and trade. Is their brutal reputation unfair?

In an extraordinary moment captured on film this summer, the tuning pegs and neck of a lyre, a harplike stringed instrument, were carefully prised out of the soil of Ribe, a picturesque town on Denmark’s south-west coast. Dated to around AD720, the find was the earliest evidence not just of Viking music, but of a culture that supported instrument-makers and musicians.

The same excavation also found the remains of wooden homes; moulds for fashioning ornaments from gold, silver and brass; intricate combs made from reindeer antlers (the Viking equivalent of ivory); and amber jewellery dating to the early 700s.

Even more extraordinary, however, was the discovery that these artefacts were not for home consumption by farmers, let alone itinerant raiders. Instead, the Vikings who made them lived in a settled, urban community of craftsmen, seafarers, tradesmen and, it seems, musicians.

“Ribe confounds history,” says Richard Hodges, a British archaeologist and the president of the American University of Rome. “What we have here defies the opinion that all the Vikings did was to raid and to rape.”

The discoveries at Ribe suggest mass production, high levels of specialisation and a division of labour – all characteristics of a settled urban society rather than a nomadic one based on pillaging.

Archaeologists uncover a Viking musical instrument from Ribe, the site of an early Viking city.

“We can see in Ribe that Viking society was based on sophisticated production and trade,” Hodges says. “It is a paradox: they made these beautiful things, they had gorgeous cloth, wonderful artefacts, but at the same time they are known to history for their brutality.”

European history has been written from the perspective of Christian chroniclers who wanted to tell us that Vikings were barbarians, Hodges notes.


The Settlers,
An Axe of Iron Novel: is a tale of survival, strife, love, and the quest
for a new home in the face of hostile opposition.  Conditions of manifest destiny propel a large
contingent of Norse Greenlanders from relative security into an odyssey of
exploration and settlement out over the unknown waters of the , to a of
1000-years-ago; to a land they called .
Posted by J A Hunsinger at 10:38 No comments:

Global Vikings: how the impact of the raiders and trader went far beyond Britain

Here's an interesting article from HistoryExtra that breaks down the Viking Age into specific dates, each featuring an historical event that occurred on that date. (Ed.)

***
Global Vikings: how the impact of the raiders and trader went far beyond Britain

When we think of the Vikings, we generally think of the early medieval Scandinavians who embarked on raids against their neighbours from the ninth to the 11th century. But the Viking age was about far more than invading and pillaging, says historian Levi Roach. Here, he chooses eight key dates that explain the expansion of the Vikings in Europe and beyond…

Inspired by History Extra’s 8 key Viking dates you need to know’article, which focuses almost exclusively on Viking activity in England, I’ve come up with a different list – which seeks to place the Viking phenomenon more firmly in its European and global context. The term ‘Viking’ (sometimes now used with a lower-case V) originally referred to those early medieval Scandinavians who embarked on raids against their neighbours. However, as these eight dates reveal, the Viking Age was about far more than invading and pillaging… 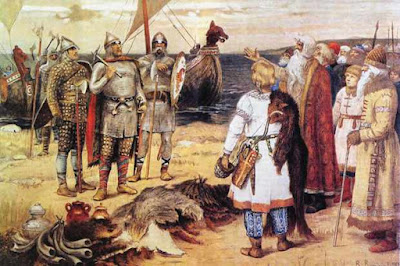 For all the attention garnered by the sack of Lindisfarne in 793, this is not, in fact, the first mention of the Vikings. It is not even the first recorded attack. Already in 789, we hear of a Viking group killing a royal officer in southern England. And seven years earlier (782), we are informed that “the Northmen, messengers of King Sigfred [of Denmark]”, came to the court of the great continental ruler Charlemagne in order to establish diplomatic contact.

This embassy sheds important light on the origins and causes of the Viking Age. Trading links between England, the continental mainland and Scandinavia had been growing for some time – as finds of jewellery, ceramics and other imported matters at the southern Danish port of Ribe reveal. According to a study led by archaeologists at the University of York, Vikings were traveling from Norway to a marketplace at Ribe as early as 725 – well before their ‘infamous pillaging’ years.

The sudden appearance of Viking raiders in the later years of the eighth century can be explained by Charlemagne’s conquest of Saxony, just south of Denmark. This was first attempted in 772 and consolidated over the next 30 years. It brought the Frankish empire – the power in mainland Europe – face to face with the Danes, opening new points of contact and new possibilities for raiding. Suddenly, the Danes became aware of the wealth, power and influence of their new neighbours. It was to Denmark that the Saxon leader Widukind fled when he was defeated by Charlemagne’s troops in 777. And just half a decade later, Sigfred made contact with Charlemagne.