To the victor goes the spoils, as they say, and these photos show some spectacular Viking age spoils. (Ed.)


Viking: rediscover the legend
Kathryn Krakowka
March 21, 2019
An exhibition tracing the Vikings through the British Isles has reached the final stop on its two-year tour. Lucia Marchini headed to Norwich Castle Museum & Art Gallery to learn more about Norsemen in Norfolk and beyond.

A fragment of a 9th-century stone cross from a church in North Yorkshire carries on it a dramatic image: a central figure, armed with a large sword, seemingly drags a captive woman. This scene vividly conjures up a popular perception of the Vikings, but it is far from being the whole picture, as Viking: rediscover the legend – a British Museum and York Museum Trust partnership exhibition, featuring material from the collections of both institutions – explores.

Another stone cross on show at Norwich Castle Museum & Art Gallery (the exhibition’s final venue) tells a different story. Presenting a mix of imagery, with the combination of angels and interlocking beasts reflecting Anglo-Saxon Christian and Norse religious traditions, the limestone cross from Newgate, York, was carved between AD 925 and 975. Many Vikings in the British Isles adopted Christianity while still retaining some of the beliefs from their homelands. This fusion can be seen also in their coinage, with some showing Christian symbols on one side and pagan motifs on the other. Even the adoption of coins (which were more prevalent in England) in preference to ingots for trade, highlights their pragmatic approach towards commerce and how they adapted to maximise trade in new lands.

Interactions between early medieval Scandinavia and Britain, and the legacy of these Norse newcomers, are charted through spectacular hoards and individual artefacts from the British Museum, York Museum Trust, and Norwich Castle Museum’s own collections. The juxtaposition of iron ship-rivets from Norway with a double-edged iron sword and a gold arm-ring, both found in Yorkshire, offers a neat snapshot of the means and motivation for the early expeditions across the North Sea, as well as the resistance put up by the locals. The 9th-century Anglo-Saxon sword was found by a nine-year-old boy, who was playing next to Gilling Beck, near Richmond; he was later awarded a Blue Peter badge (also on show) for his discovery. The sword’s handle is finely decorated with geometric patterns and plant designs in copper-alloy. The arm-ring from York, containing more than 300g of gold, is a substantial object and an unusual one in its choice of material – silver was much more commonly used in items of this kind. It may have been given by a ruler to an important follower in recognition of their service and loyalty.
Read more…

AXE OF IRON: This review of Assimilation, the final book of the...

Email ThisBlogThis!Share to TwitterShare to FacebookShare to Pinterest
This review of Assimilation, the final book of the Axe of Iron trilogy, was written by a distant relative - my part of the family left Sweden in 1876 - and is offered here exactly as she wrote down her thoughts. I was fortunate to meet my distant relative in Gamla Uppsala, Sweden some years ago. We have remained in touch ever since. 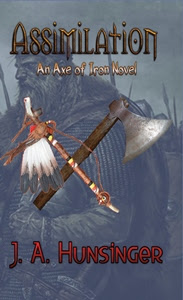 I have finished reading your book. It is your best.
I am impressed with it, very impressed. It reveals once more your deep
knowledge of northern archaeology and customs but it is Death Wind that stays
in mind. When I read it the first time I laid down the book and didn't touch it
for two days, out of fright. My heart beat and I had to calm down. Actually,
some of your favourite expressions now enters my mind.

Death wind touched my heart. Your description of obsession accompanied by
the magic of the soothing and frightening nature is masterly. The composition
is more dramatic than I noticed in the first two volumes. You succeed at
composing thrill, building up the story with cliff hangers, cutting off near the
top of the thrill, only to return to it a few sections later.

Sublime moments are balanced against horror scenes, eating raw hearts for
example. The atmosphere of magic lies like a sweeping cloud in and on
everything, nature, thought, relationships, feelings and it is described with all
the five senses. People hear howls, shrills and whinings and feel them on their
skins. They absorb smells of food, smoke, breaths and nature and they are
gluttons. They have omens, they know beforehand, they guess, they fear. They
know how to hide. Magic is everywhere. Just one example:
"his presence had left an imprint on the soul of the young Haudeno warrior
that he would never forget. He felt that something was watching him."

At the base there is love, hate and revenge. The love between Nipishish and
Ingerd is perhaps not described as burning hot, rather true and everlasting. It
is absurd that it should turn Nipishish into a killing monster but revenge is
human and absurdities and complexities are human too and moreover, they
make good stories.

Love has many facets. You describe it between mother and son, father and son.
It lies behind the sacrifice of a son and the sparing of a father. There are also
stepfathers and adopted sons, parallel stories, with a twist. It is easy for me to
use the word "theme" as if it was all conjured up. It isn't. Assimilation could
have taken place just like you describe

The love between Nipishish and the wolf, master and animal, for example, may
seem romantic but I am sure that it could have happened just like you
described. It fits into this pattern of parallelism and has like mother, father and
son, antique patterns, for instance Ulysses's faithful dog, the story about a lion
that spares the man who once helped him.

Your vocabulary is enormous with interesting choice of words. I have always
had the feeling that verbs of movement increase the tension and thrill, and you
do use them. Just an example:
touched, crept forward, inched forward, slithered forward (349 ff)
"---the wolf angled toward where the man knelt on the lakeshore." (363)
A French word is "---to reconnoiter with the Hadeno village for the presence of
Ivar" (19)

Overwhelming are all the words that have to do with the processes of work
among the Indians and the Vikings.

The introduction of the inner monologue in the cursive is new in this third
book. It has to do with both language and composition is and makes the
characters sly and and calculating.

Negative points of view. There are not many. Since I read the first two books a
few years ago, I had forgotten about the names, so a table of names would
have helped. At times I missed voice of the wise and omniscient narrator. In
Death Wind it is more vitally present than in the preceding chapters.

The book and especially Death Wind is written with such youthful energy that I
suspect it was conceived and existed in various stages of completion long
before 2016. If not, you are as vital as a teenager. I look forward to hearing
about the genesis and stages of the book.

Tonight there will be a TV program called Vikings in Canada with Pat Sutherland.
I have seen it once and am going to do it again. What do you think about her
research and findings? According to her the Vikings were great traders and
trade is what you mention trade in your books as well. I remember she showed
a little bit of a pair of scales as a proof that the Vikings were tradesmen. Scales
have been found in Viking graves in Russia and it has been contended that it
was the women who used them.

Thank you for publishing this book.
Greetings,
Sonja Ingegerd Bostrum
Gavle, Sweden
Posted by J A Hunsinger at 12:22 No comments: