Another excellent heads-up article from Ancient Origins that reveals new and completely different information on the English King, Alfred the Great, that will rewrite that period of medieval English history.

As always with Ancient Origins, the embedded links can take you on a journey that will leave you much better informed on the subject. (Ed.)

A hoard of Viking coins worth at least half a million British pounds has been recovered by police investigating the illegal trade of historic treasures and they tell a completely different story of Alfred the Great's role in English history .

The Recovery of the Viking Coins
Codenamed “Operation Fantail”, the sting was directed by Detective Inspector Lee Gosling of Durham police who said several suspected criminals have been arrested on suspicion of dealing in “culturally tainted objects”.

He told reporters, “We believe the material recovered comes from a hoard of immense historical significance relating to the Vikings and we are delighted to have been able to hand it over to the British Museum.”

The coins (and a silver ingot ) were recovered by police at homes in County Durham and Lancashire earlier this month and would have circulated around 878 AD, at a time when Alfred the Great of Wessex, a powerful Anglo-Saxon warrior king fought a series of battles against Vikings which was to lead to the creation of a unified England under Alfred and his successors.

Viking Voyages: Wings of A Dragon


This is a video published on YouTube by Timeline. I think you will find the information portrayed interesting. (Ed.) 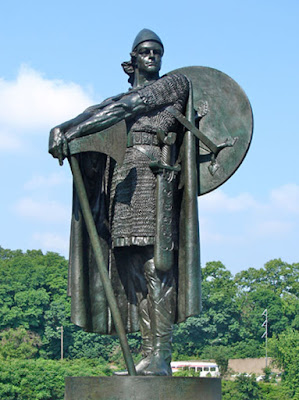 Viking Voyages: Wings of A Dragon