Excerpted from an Ancient Origins article:

Better check out all your dresser drawers, you might have a treasure from the Viking Age hidden therein that you don’t even know about. (Ed.) 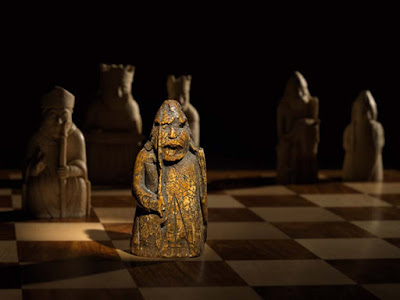 3 JUNE, 2019 - 19:01 ED WHELAN
Rediscovered Viking-era Lewis Chessman Is Predicted To Make A Family Millionaires
an old heirloom looks likely to make a lucky family a fortune when it goes to auction. They found one of the Lewis Chess pieces that belongs to one of the most famous chess sets in all of history. The Lewis Chessmen are one of Scotland’s most prized historical treasures. The discovery of the medieval chess piece means that we almost have a complete set of these extraordinary Norse chessmen.

Stored in a Drawer
The find was made in Edinburgh and in a family home. According to the BBC “the Edinburgh family's grandfather, an antique dealer , had bought the chess piece for £5 in 1964.” It appears that he bought the chess piece without fully realizing its significance, even though the grandfather had catalogued the item. According to the Daily Mail , “it can be assumed that he was unaware he had purchased an important historic artifact .” The family who owns the item want to remain anonymous.

This PNAS - Proceedings of the National Academy of Sciences - paper from 15 July 2019, is the scientific paper published after the startling discovering at L'Anse  aux Meadows, Newfoundland, Canada.

This paper from PNAS is the formal documentation for the article I posted on 23 July 2019, alluding to this discovery. (Ed.)

Abstract
The UNESCO World Heritage site of L’Anse aux Meadows (LAM) in northern Newfoundland is the only undisputed site of pre-1492 presence of Europeans in the Americas. In August 2018, we undertook fieldwork at LAM to sample the peat bog 30 m east of the Norse ruins for a multiproxy paleoenvironmental assessment of Norse settlement. Instead, we encountered a new cultural horizon. Here we report our fieldwork at this iconic site and a Bayesian analysis of legacy radiocarbon data, which nuance previous conclusions and suggest Norse activity at LAM may have endured for a century. In light of these findings, we reflect on how the cultural horizon, containing nonnative ecofacts, may relate to indigenous or Norse activities.
Norse
indigenous
Bayesian modeling
insects
pollen
The Norse colonization of the North Atlantic, a defining feature of the Viking Age, reached its ultimate extent on the shores of Newfoundland some 4 centuries before Christopher Columbus (1). Pre-Columbian presence of Europeans in the New World had often been suspected on the basis of oral histories inscribed by mid-13th century Icelandic scholars in Grænlendinga Saga and Eiríks Saga Rauða. These sagas recounted how Norse explorers from Greenland discovered and established a settlement in Vínland, a land west of Greenland (2). Nevertheless, it was not until the 1960s that definitive evidence was discovered near the Newfoundland outport of L’Anse aux Meadows (LAM) (1).

Throughout the 1960s, 8 Icelandic-style turf structures were excavated at LAM (Fig. 1), identifying Norse material culture such as a bronze cloak pin, a steatite spindle whorl, and evidence of rudimentary iron working (2). The remainder of the European material culture was nondiagnostic, comprising fragmentary iron, primarily nails and rivets, a bone needle fragment, and a whetstone (1). Numerous stone tools pertaining to indigenous peoples were also recovered (2), perhaps suggesting LAM was the theater of the earliest contact between Europeans and North Americans. In the 1970s, further excavations by Parks Canada revealed iron-worked wooden objects and jasper fire starters matching rocks that outcrop in western Greenland and Iceland (2). A wealth of wooden debitage was also uncovered, which was attributed to both indigenous and Norse occupations (2). Compared with Norse sites in Greenland, the limited suite of material culture from LAM is notable for the near absence of steatite and osseous material commonly used for all manner of implements in Greenland (Fig. 1). Botanical analyses identified wood and nuts from the White Walnut (Juglans cinerea), an exotic species in Newfoundland that suggests wider-ranging Norse voyages to the south (2).