Population Genomics of the Viking World

This excerpt from a very interesting article comes from the lab where the prodigious effort to produce this epic work originated. Some readers may be overwhelmed with the technical jargon, but stick with it, the content is valuable.

The cadre of researchers responsible for gathering the data is amazing and the effort took them 4 1/2 years.

Well worth your attention should you harbor a real interest in your own heritage, or the Norse people and their wanderings. (Ed.) 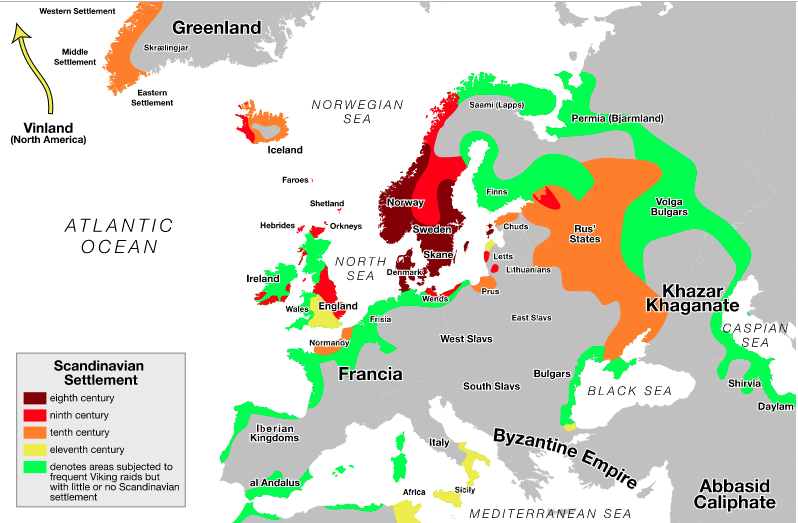 Population Genomics of the Viking World


Scandinavian genetic ancestry and the beginnings of the Viking era
Although VA Scandinavians shared a common cultural, linguistic and material background, there was no common word for Scandinavian identity at that time1. The word ‘Viking’ is used in contemporary sources to mean a ‘pirate’ or ‘sea warrior’2. As such, there is no single ‘Viking world’, but a coalescence of ‘Viking worlds’ marked by rapidly growing maritime exploration, trade, war and colonization, following the adoption of deep-sea navigation among the coastal populations of Scandinavia and the Baltic Sea area7,8. Thus, it is unclear whether the Viking-phenomenon refers to people with a recently shared genetic background and if foreign influence initiated or accompanied the transition from the Scandinavian Iron Age into the Viking era.

To assess the genetic relationship of the VA Scandinavians with that of earlier European peoples, we performed genetic clustering using multi-dimensional scaling (MDS) on a pairwise identity-by-state (IBS) sharing matrix, as well as latent mixed-ancestry models (Admixture)9.

We find that the majority of our samples broadly cluster within the range of European Bronze Age (BA) and Iron Age (IA) populations, characterized by an ancestry component that is related to pastoralist populations from the Pontic-Caspian steppe (Fig. 2a and Extended Data Fig. 2) entering Europe around 5000 BP10,11.

We find that the transition from the BA to the IA is accompanied by a reduction in Neolithic farmer ancestry, with a corresponding increase in both Steppe-like ancestry and hunter-gatherer ancestry (Extended Data Fig. 6).

While most groups show a slight recovery of farmer ancestry during the VA, there is considerable variation in ancestry across Scandinavia. In particular, we observe a wide range of ancestry compositions among individuals from Sweden, with some groups in southern Sweden showing some of the highest farmer ancestry proportions (40% or more in individuals from Malmö, Kärda or Öland).

Ancestry proportions in Norway and Denmark on the other hand appear more uniform (Extended Data Fig. 6).

Finally, we detect an influx of low levels of “eastern” ancestry starting in the early VA, mostly constrained among groups from eastern and central Sweden as well as some Norwegian groups (Extended Data Fig. 6).

Testing of putative source groups for this “eastern” ancestry revealed differing patterns among the Viking Age target groups, with contributions of either East Asian- or Caucasus-related ancestry (Supplementary Note 10).


Here's an excerpt from an article in Iceland Review, telling us that we missed the Viking festival in Iceland - maybe next year. (Ed.)

Iron smelting, Viking crafts, and Viking tool forging were just a few of the activities guests partook in at the Járngerðarhátíð (Iron Making Festival) held in West Iceland last weekend. Hosted at Eiríksstaðir farm, the birthplace of Leifur Eiríksson, the festival brought together archaeologists, metalworkers, and Viking enthusiasts to partake in all things Viking. RÚV reported first.

The festival was organised in collaboration with US Organisation Hurstwic, which uses “the scientific method to research, study, and test Viking-related topics,” according to their website. The festival was labelled an “homage to experimental archaeology, where guests step into the world of the Vikings.” The focus of the weekend was using experimental archaeology to unlock the secrets of iron making in Viking-age Iceland.

Over the weekend, Hurstwic set up several fire-bellowing furnaces, including one made of Icelandic turf, in order to test archaeologists’ knowledge of how Iceland’s first settlers forged iron over a thousand years ago. Though much is known about Viking Age iron smelting techniques, researchers have yet to fully understand how iron was forged in Iceland using local materials.

The Naval Power of Norse Dublin

An excerpt from Medievalists through Academia detailing what is known of the naval power of the Norse Ireland. (Ed.)

The Naval Power of Norse Dublin 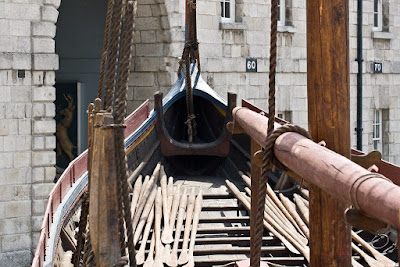 Introduction: In the ninth to twelfth centuries the Dublin fleet was one of the most formidable war machines in the Irish Sea area. I shall analyse the annalistic and archaeological evidence for Hiberno-Norse naval power in Dublin around 1000 AD. Drawing on comparative information from Scandinavia and England, I shall consider the manpower needed for the fleet, and the financial and monetary implications of the size of the fleet.

By Christmas of 1013 it may have seemed likely that all of Britain and Scotland would fall under Norse supremacy within the next few months. In England, King Svein Forkbeard had all but conquered the country except for London. By Yuletide, according to Njál’s saga, King Sigtryggr Silkenbeard of Dublin feasted at Jarlshof in Orkney with Jarl Sigurd. Their plan seems to have been to use the unrest building in the north-east of Ireland against the newly established high-kingship of Brian Bóruma and to assemble a large army of Norse mercenaries with the seditious men of Leinster against the high-king. King Brian was well aware of the threat from Dublin which he had unsuccessfully besieged in the autumn of 1013.

But whatever high hopes may have been nurtured at the Orkney jarls’s feast in Jarlshof, a few months later the tables had turned. King Svein died in February 1014 and the Danish hold on England seemed to crumble. In April, on Good Friday, Brian Bóruma’s men defeated the men of Leinster, Orkney and Scottish Isles. While the Danes eventually reasserted their power in England, the Dublin Scandinavians gave up any larger plans they may have had for Ireland.

The discovery was made at Skaill Farmstead in Westness, Rousay, and is believed to have been a high-status Norse hall, dating as far back as the tenth century.

Westness is mentioned in the Orkneyinga Saga - a historical narrative of the archipelago - as the home of Sigurd, a powerful 12th-century chieftain.
The site offers an "unparalleled" opportunity to research eating habits in the region over a millennia, according to researchers from the University of the Highlands and Islands (UHI).
The name Skaill suggests the site was home to a Norse hall or drinking hall and was a high-status site.
A team from the UHI Archaeology Institute, residents and students have been digging at the site for a number of years in an effort to find the building.
Dan Lee, co-director of the excavation project, said "The exciting news this season is that we have now found the hall at Skaill, as the place name suggests.
"You never know, but perhaps Earl Sigurd himself sat on one of the stone benches inside the hall and drank a flagon of ale."
The hall is believed to date to the tenth to 12th centuries and was discovered below a more recent farmstead.
"Substantial" stone walls were found 5.5m apart, with internal features such as stone benches along either side.
The building appears to be more than 13m long and facing down a slope towards the sea, although it is not yet fully uncovered.
Finds have included soapstone from Shetland, pottery and a bone spindle whorl, while a fragment of a Norse bone comb was also unearthed.
Archaeologists have been investigating the later stages of the farm complex and its middens, with a particular focus on past diet, farming and fishing practices.
Read more…