Four warrior graves were found in archaeological excavations in Poland. The tombs in the medieval room are thought to belong to an elite group of soldiers. For many civilizations in the Middle Ages, soldiers were among the upper class people.

Four mysterious tombs discovered in Poland reveal the secrets of medieval warriors. According to researchers, the 11th-century tombs were found in a cemetery in the village of Ciepłe in northern Poland. Analyzing the remains and items buried with soldiers, experts discovered that the warriors were of Scandinavian origin.

Dr. from the Gdańsk Archeology Museum. “There were four very richly equipped graves in the middle of the cemetery. They were probably warriors, given the guns and riding equipment found next to their bodies,” Sławomir Wadyl said. According to Wadyl, those buried in the central part of the cemetery represented the elites in social life, as evidenced by the structure of their tombs and equipment.

This week we have featured an article from Ancient Origins about a very famous sword, perhaps made by Viking smiths, composed of a steel difficult to replicate today.

This may be the most famous sword blade of the Viking era, but it is thought that the steel that was forged into these magnificent blades originated in the Rhineland of Germany, not Scandinavia.(Ed.)

Viking Ulfberht Sword
Viking Ulfberht blades were forged with crucible steel and have the curious inscription ‘VLFBERHT' on the blade. Dated between the ninth and 11th centuries, according to an article on War History , today’s best blacksmiths have had a hard time reproducing this material, which is more superior to what is found in average medieval swords. The sharpness of the blades means wielders could easily cut through bones and lower-quality weapons with one blow, which raises the question, 'How did Viking warriors develop such an advanced sword with such a pure metal that was hundreds of years ahead of the Viking technologies of the time?

The scientists who have tested the swords calculated that crucible steel, with its high carbon content (up to 1.2%) meant it was necessary to have heated the metals to a temperature of 1,600° C. This indicates the Ulfberhts were about 800 years ahead of European methods of achieving such high temperatures, which were not figured out until the Industrial Revolution in the 19th century.


The Roman coin was found only 15 centimetres deep in the soil; it dates back to the time of Emperor Marcus Aurelius and is the northernmost find of its kind, signalling that trade contacts in the area date back to the Iron Age.

In just a few days, hobby archaeologist Ben-Harry Johansen found a 2,000-year-old coin and a richly decorated 1,000-year-old Viking sword at Våg in the municipality of Dønna on the Helgeland coast, national broadcaster NRK reported.

“The coin lay only 15 centimetres into the earth, in the so-called plough layer, where people with metal detectors are allowed to search,” Ben-Harry Johansen recalled with excitement.

Researchers described finds of this calibre as extremely rare, especially at the amateur level.

According to Caroline Fredriksen, a research fellow at the Department of Archaeology and Cultural History at the Science Museum at the Norwegian University of Science and Technology, both the coin and the sword are very important finds.
“The sword is special because it has decor with silver and copper inlay. Most people did not possess such great swords in the Viking Age. And the coin is the northernmost Roman coin we have found in Norway,” Fredriksen told NRK.

Ben-Harry Johansen's coin dates back to the time of Roman Emperor Marcus Aurelius (121-180 AD), according to Fredriksen. Marcus Aurelius, also a Stoic philosopher, ruled from 161 to 180 and was the last of the “Five Good Emperors”, as well as the last emperor of the Pax Romana, an age of relative peace and stability for the Roman Empire.
“This finding suggests that Dønna had international contacts as early as the Iron Age. The findings show that Nordland was part of the Iron Age trade network,” Fredriksen concluded.

According to the research, metal detectors used for hobby purposes are becoming increasingly trendy in Norway, and the metal search associations are reporting increasing interest. This is reflected in the the number of historical discoveries that increased dramatically over the past decade. This, in turn, has raised objections from a number of professionals, as well as the police.

“In Norway, metal searching is legal, as long as you follow the Cultural Heritage Act, and are complying with the the guidelines for private metal searching,” Frederiksen explained, suggesting that there are arguments to be made for and against hobby archaeology.

37-year-old Ben-Harry Johansen and his friends go on trips with metal detectors as often as they can, but they say it's a time-consuming hobby. Still, he has found several objects of interest, including a silver bracelet, an axe and a lead cross with a runic inscription.

“I am interested in history, and there has been great activity by Vikings here on the island. Here, among other things, there is a boat tomb and several burial mounds, which I find interesting,” Johansen said. “As in Dønna, for example, where the objects found can say something about the wealth and social status of the place, but also who the people here were in contact with”.

The following excerpt from a Polish FirstNews article, regards the finding of graves containing four Viking warriors that purportedly came to northern Poland from Denmark about 1000-years ago. (Ed.)

Archaeologists in northern Poland have made an unexpected discovery: certain local graves from the Middle Ages belonged to warriors from Scandinavia.

The discovery was made in a medieval cemetery in the village of Ciepłe, in the Pomeranian region in northern Poland.

Some of the graves are around 1,000 years old; they belong to people who lived during the reign of Bolesław the Brave, the first King of Poland, who lived from 967 to 1025. 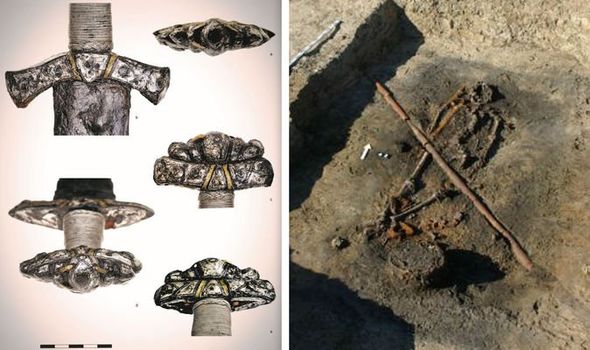