Top 5 places that were raided by Vikings in Ireland

This very interesting article excerpt on the Vikings in Ireland is from a travel company, IB4UD, Ireland Before You Die, and it lists most if not all the important Viking sites in Ireland. (Ed.)

It’s believed that the first Vikings in Ireland arrived on Irish shores around the late 8th century and repeatedly invaded the Irish coastline from the 9th to the 11th century. 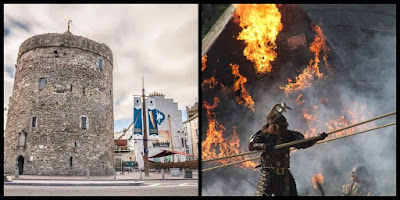 While it’s true that the Vikings terrorized the Irish people during their 9th to 11th-century raids on Irish towns and monasteries, they also had an undeniable and significant role in shaping and influencing many of Ireland’s largest cities which, still to this day, have strong links and ties to the Vikings.


In this article, we will list what we believe are the top five places that were raided by Vikings in Ireland.

Glendalough, Wicklow – one of Ireland’s most ancient monastic sites


Glendalough is an ancient monastic site that is located in the stunning Wicklow National Park. The monastery became a target for a widescale Viking invasion in the 9th century as the Vikings raided the monastic city in the hopes of finding valuable relics.


While this Viking raid resulted in the destruction of many sites on the monastery, Glendalough as a whole survived and continued to remain one of Ireland’s most important ancient monastic sites.
Glendalough is still a popular tourist attraction to this day and attracts thousands of visitors every year.

I have featured other articles from Ancient Origins in the past about the incredible archaeology going on under S. Great George's Street, Dublin, Ireland, and here's another good one for your reading pleasure.

They have unearthed a great deal of artifacts from the site in the recent past, now, here is another wrinkle on the subject of Vikings in Ireland. (Ed.)

As science progresses and archaeologists are forging new positive relationships with developers around Irish heritage, more secrets from Ireland’s Viking past are coming to light, and they are not just found in burial grounds, unearthed dwellings, and old settlements; they can be found in the DNA of the modern-day Irish people.

The Vikings may have only been present in Ireland for three centuries – a drop in the ocean compared to its long and dramatic history – but recent research is showing that their influence was far greater than previously realized.

The Viking Age in Ireland – Do We Need to Revise the Textbooks?
The Viking Age in Ireland is typically seen to have begun with the first recorded raid in 795 AD, taking a turning point in 841 AD when the first settlements were established in Dublin and Annagassan near Dundalk, and ending in 1014 AD with the Viking defeat at the Battle of Clontarf by the Irish High King Brian Boru (although the Vikings continued to play a role in Ireland’s history until the arrival of the Normans in 1171 AD).

Recent archaeological discoveries in Dublin have been raising questions about whether this timeline is accurate, hinting that there may be a lot more to the story. In 2003, excavations were underway as part of the expansion of the Dunnes Stores headquarters on Dublin’s South Great George’s Street, when archaeologists found the bodies of four Vikings aged between their late teens and late twenties.

It's a shame that many journalists think it necessary to beat the drum of climate change as being responsible for a changing climate.

Hello - that is what climate has done for all the thousands of years that we have a record of, it changes, so I agree with that part.

Anyway, this excerpt from the UK's Daily Mail is good, and way better than all the others written by hand-wringing, left-wing infected, competitive journalists from other publications, about the artifacts found as a result of catastrophic, climate change induced, glacier meltdown. (Ed.)

Viking's 1,500-year-old arrowhead that was preserved in ice is discovered after climate change melts Norwegian glacier

Archaeologist uncovered a 1,500-year-old iron arrowhead in the Norway glacier Jotunheimen
This team investigates melting glaciers in the country to find such  relics - they have found more than 2,000

The arrowhead, made of iron, is seven inches long and weighs just a little over an ounce – and melted at the ice at one mile.

Archaeologists involved noted that climate change has made its way to the Jotunheimen glacier, which is warming temperature sand melting the ice – allowing the artifacts to be set free from their icy cage.