Here is a follow-on article from Ancient Origins on the Viking ship burial found in Norway.

I posted the first article on this blog on the subject back in January, 2020.

Archaeologists and the Norwegian government intend to excavate the site to save the ship from impending destruction by natural events. (Ed.) 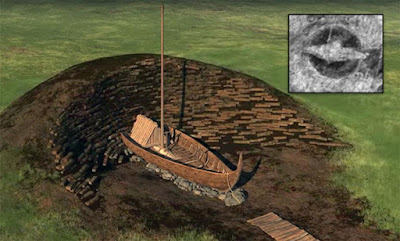 1,000-Year-Old Buried Viking Ship Will be Raised!
6 MAY, 2020 - 16:33 ED WHELAN
Norwegian archaeologists have announced a plan to raise a buried Viking ship from the earth. The vessel is from a ship burial that is over 1000 years old. It is the first time in over a hundred years that a buried Viking ship has been excavated. But the experts have declared the excavation necessary and are in a race against time to salvage and preserve the very rare and important vessel.

The Gjellestad Viking Ship was found near Halden in southern Norway in 2018. It was discovered during a georadar survey , conducted by NIKU, overseen by Knut Pasche. Georadar technology allowed researchers to scan and image the vessel that had been buried here sometime between the 8th and the 10th century AD. They determined that it measures 65 feet (19.8 meters) and is made of oak.

Live Science quotes Sigrid Mannasaker Gunderson, an archaeologist with the local county, that the “vessel was likely made for travelling long distances at sea.” It is possible that it once had a mast and oars. Images show that there may be grave goods in one section of the buried ship.

The History of Vikings in Derbyshire

From the Derbyshire Life and Countryside, UK, comes this interesting article on what archaeological information is gleaned from the coins contained in Viking coin hoards. (Ed.)

The History of Vikings in Derbyshire

Coins are ‘very small texts’ for Dr Gareth Williams, curator of early medieval coins and Viking material at the British Museum. They are full of clues to the history of a particular period and he can read them like a book. A historian by profession, he says the joy of working in a museum as opposed to a university department is that you can share your knowledge with a much wider range of people – a passion for communication that he shares with his wife, Lesley Smith, curator of Tutbury Castle.

We’re at Tutbury on a winter’s day, with the rain falling and the ancient castle wreathed in mist. Dr Williams has come into prominence at this particular time in relation to the large Viking hoard of gold jewellery, a silver ingot and coins discovered by two amateur metal detectorists in Herefordshire in 2015. The finders, George Powell and Layton Davies, were convicted and jailed in November last year for failing to declare the find as the law demands; for attempting to sell items from the hoard – only 30 coins have been recovered, along with the jewellery – and for denying that they had secreted coins worth millions.

The hoard was hidden in all likelihood by a Viking warrior as his army retreated into the Anglo-Saxon kingdom of Mercia following the victory of Alfred the Great in the year 878. Such hoards were generally buried for safety and ‘because the Vikings did not always trust each other’, Dr Williams suggests. ‘Alliances could change and members of an army could later find themselves on the opposite side, so it was worth burying your wealth when you were encamped, even if it was just overnight.’

He cheerfully confesses to a mixture of huge excitement and ‘a bit of irritation’ when he learned of the hoard in that summer of 2015: excitement because initial reports suggested it was something very special, and irritation because he was working on a book about hoards and the last thing he wanted was another one which ‘could upset everything you have got straight in your head…’. It didn’t do that. What the coins did, he rejoices, was to establish a clear connection between two kings, Alfred the Great, King of Wessex from 871-879, and Ceolwulf II (874-879), one of the lesser known kings of the independent kingdom of Mercia.