The Baltic Finns were Vikings too, but the world ignores it

This excellent article excerpted from Estonian World focuses us on a largely ignored part of Viking history. The author points out that the word Viking is not an ethnicity, rather it is what they were called by others. We do not know what they called themselves, so the author is correct, Viking is not an ethnicity. It can be argued that the term should apply to all the seafaring people of the Baltic Seacoast.

Assuming that Swedish and Finnish seafarers both have been referred to as Vikings, why not Finnic Estonia, after all that country is just across the narrow Baltic Sea from Sweden, and the area was no doubt part of the trade and pillaging routes followed by everybody from everywhere.

Männi is also correct in saying that archaeologists are not receptive to new ideas. Think how damaged their bloated opinions of themselves would be if they had to retract something, or correct something. Why the masses would then know that it was all guesswork anyway.

Regardless of your opinion on the matter, the author, Archaeologist Marian Männi, makes a good case that Estonia, at the least, should be included with Norway, Sweden, Denmark, Finland, Russia, and Poland, as being the Viking's homelands. (Ed.)

***
The Baltic Finns were Vikings too, but the world ignores it 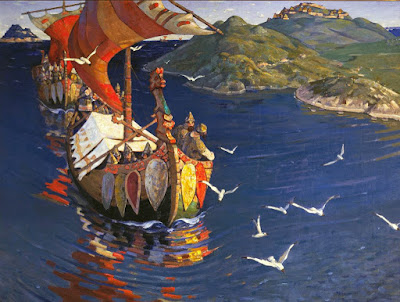 The Estonian archaeologist, Marika Mägi, argues that the Baltic Finns – the people who lived in the territories of modern Finland and Estonia – were Vikings, too, but the world ignores this fact.

This article is published in collaboration with Research in Estonia.

A scientist’s long crusade for making the world see the hidden part of the Viking history. The Estonia and Denmark-based Tallinn University archaeologist, Marika Mägi, has spoken about the Viking Age sailors for many years, but still compares it with banging her “head against the wall”.

It is because she does not speak about the Norsemen, the Scandinavian Vikings, but the ones who lived a bit to the east, along the eastern Baltic Sea shores. And this is often uncomfortable to hear for other scientists and Viking experts, because it forces them to rethink their knowledge. If the world would accept the crucial role of the Baltic region in Viking communication, many stories would have to be retold and many knowledge gaps refilled. And that’s hard work.

When Mägi points out that they missed a piece in the puzzle, her listeners politely nod and go on ignoring the region. Why make the effort?
The Baltic region, as usual, is seen like an empty void between Scandinavia and Russia.

But this is simply not the truth.