An excerpt from an article in Ancient Origins that promises to increase our knowledge of Viking shield technology.

In the past when archaeologists opened a warrior’s grave, little remained of the shield but the iron boss. Now they have a bit more to postulate.

For example, how do you feel about shield walls? Did the Vikings use them in combat? I don’t know either, but the author of the link furnishing the reader with a contemporary opinion on a 1000+-year old battle tactic doesn’t think so. Who knows? (Ed.) 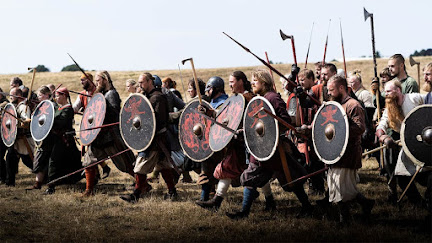 How exactly the Vikings and their Iron Age ancestors made their war shields has always been a mystery, but a new study explains this in detail and shines light onto a traditionally shadowy aspect of ancient Nordic warcraft and weaponry.

Dissolving Myths: Vikings Did NOT Hide Behind Shield Walls

A Deadly Formula - Why Viking Weapons and Armor Were So Effective

Iron Age and Viking Age cultures in Northern Europe crafted shields from thin wooden boards that were reinforced with animal skins before battles. Until now these covers were only ever considered in aesthetic terms, but a new research project demonstrates how these shield covers “increased strength and enhanced structural integrity.” 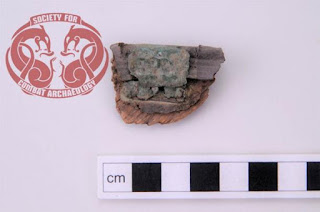 The following excerpt from an article posted by Ancient Origins tells us about the exciting discovery of a Viking longhouse on Iceland from clues passed down in the Norse sagas of the period. (Ed.) 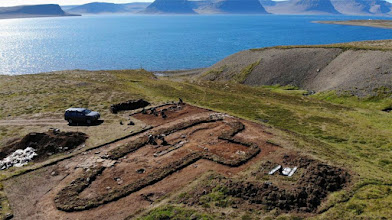 In 2013 archaeologists in Iceland came across an ash pile which led to excavations that began in 2017 at Arnarfjörður, near the church town Auðkúla in Iceland. The ash pile led to the discovery of a 10th century farming settlement and over the last three years the archaeologists have been unearthing the layers of evidence. Now, at the end of the 2020 excavation season, an entire earthen house and hut have been uncovered.

The archaeological site at Arnarfjörður was identified in 2017 with the discovery of an ash pile. In the summer of 2020, archaeologists excavated the 10th century farming settlement. (Margrét Hallmundsdóttir / RUV)

Following the Clues in Ancient Sagas

Written in the first half of the 12th century, Landnámabók is the oldest ever written source to have been discovered detailing the early settlement of Iceland. This epic work of history presents a list of the first Icelandic inhabitants and their families, including 3,000 proper names and 1,400 place names. According to  Landnámabók, the earliest settler in Svínadalur was Eyvindur Audkúla, and around 1300 AD Kolbeinn Bjarnason Auðkýlingur became a Jarl (Earl). From these ancient entries archaeologists have slowly uncovered what they believe is the early 10th century settlement mentioned in the saga.

According to RUV, archaeologists in Iceland discovered an earth house in which they found a large furnace with cracked rocks. In an adjacent hut measuring 23 meters long, a traditional log fire was discovered. Back in 2019, the hut was found after a drill core study and further survey ditches were created this summer. According to Dr. Margrét Hallmundsdóttir, the archaeologist leading the study, the hut is "very large, and the floor is at least seventeen meters long.” Not only is another hut believed to be located nearby, but an iron workshop, a cowshed and three further houses are expected to be located within dig site that they were all connected with iron mining over 1000 years ago.

Largest ever study of Viking genetics

An excerpt from Medievalists features their report on a paper submitted by a group of archaeologists in Denmark, on the Viking genome.

I think you will find the article thought provoking and interesting. (Ed.) 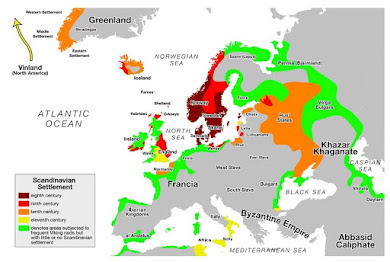 Largest ever study of Viking genetics

The largest genetic study of the Vikings ever done has just been published, and offers surprising discoveries about the medieval warriors, including that they may not be quite as Nordic as hitherto believed.

The researchers, led by scholars from the Univerisity of Copenhagen, have sequenced the genome of 442 bone fragments from the Viking Age, from throughout Europe and Greenland. They were found from archaeological sites dating between the Bronze Age to the about year 1600, and their data was compared to modern-day individuals. The results were reported in the journal Nature.


“The Vikings had a lot more genes from Southern and Eastern Europe than we anticipated.” explains Eske Willerslev, Professor at Lundbeck Foundation Center for Geogenetics at the GLOBE Institute at the University of Copenhage. “They frequently had children with people from other parts of the world. In fact, they also tend to be dark-haired rather than blond, which is otherwise consider an established Viking-trait,” n, Eske Willerslev, explains.

The new study also reveals that generally Vikings were a lot more genetically diverse than the peasant societies on the Scandinavian mainland. “The Vikings lived in coastal areas, and genetically speaking, they were an entirely different people to the peasant societies living further inland,” adds co-author Ashot Margaryan. “The mainland inhabitants had a lot less in common with the Vikings than the peasants who lived in Europe thousands of years ago. You could almost say that genetically speaking, the peasants missed out on the entire Iron and Bronze Age.”
Read more...
Posted by J A Hunsinger at 09:31 No comments: