Excerpt from the Smithsonian magazine details the discovery of several Viking Age graves in Norway, one of which contained a warrior and his sword. The hypothesis on the swords placement beside the warrior is a stretch, but interesting. (Ed.) 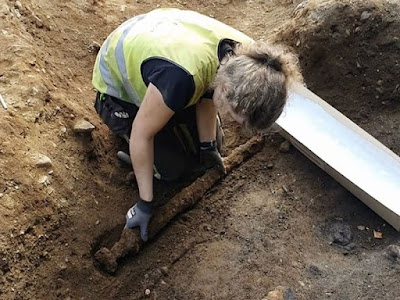 Vikings’ weapons were often buried on the opposite side of where their owners had held them in life, pointing toward belief in a “mirror afterlife.”

Archaeologists conducting excavations in Vinjeøra, Norway, recently uncovered a group of ninth- or tenth-century Viking graves—including one whose unusual layout suggests it may contain the cremated remains of a left-handed warrior.

Most swords found in Viking burials are placed on the right side of the grave, explains George Dvorsky for Gizmodo. But this individual was interred with his weapon on his left side.

In combat, Vikings held their sword with one hand while wielding a shield on the other arm. Right-handed fighters kept their scabbard, or sheath, hanging on the left side to facilitate reaching across and pulling out their blade. When these warriors died, they were buried with their sword and scabbard on the right side in a reversal of how they had appeared in life.

“The idea is that this placement must reflect some beliefs that were important in the mortuary rites,” excavation manager Raymond Sauvage, an archaeologist at the Norwegian University of Science and Technology (NTNU), tells Live Science’s Laura Geggel. “Other [Viking] items are often found to be placed mirrored of what is normal. Several archaeologists therefore believe that this may reflect a belief that they understood the afterlife to be mirrored of the normal world.”

Researchers from NTNU are excavating the area ahead of expansion of a highway, according to a statement. So far, finds include the overlapping graves of several warriors—including the probably left-handed Viking—and a burial thought to hold the ashes of an early Viking woman.

The archaeologists made this gender determination based on the presence of artifacts such as an oval brooch, a pair of scissors and several colored beads.

Combined, the proposed woman’s cremated remains weigh just over four pounds, or the estimated weight of a whole body. Most Iron Age burials contain only half a pound of material. For now, Gizmodo notes, the archaeologists don’t have an explanation for the discrepancy.