Heritage Daily from the UK brings us this well-written and detailed article about the World Heritage Site of L’Anse aux Meadows, located on the northeastern tip of Newfoundland, Canada, the only unquestioned medieval Viking settlement ever discovered in North America.

I have been there, and I must say the place gave me chills. (Ed.) 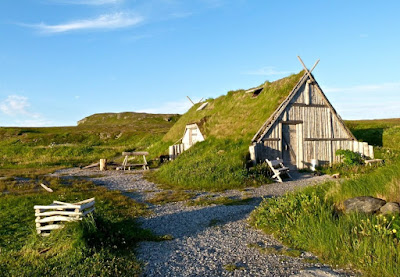 L’Anse aux Meadows is an archaeological site, and the remains of a Norse settlement in the Canadian province of Newfoundland and Labrador.

The earliest evidence of occupation dates from roughly 6,000 years ago, with the most prominent period of prior Norse settlement, dating to the Dorset people, a Paleo-Eskimo culture.

A study of the Norse architectural type, artifacts, and carbon dating suggests that the Norse settled at L’Anse aux Meadows around AD 990–1050. Archaeologists suggest that the settlement served as an exploratory base and winter camp, with industrial activity for iron production and woodworking, likely used for ship repair.

The site consists of eight buildings (labelled from A–J) most likely constructed from sod (grass and the part of the soil beneath it held together by its roots) placed over a wooden frame. Buildings B,C, and G have been identified as possible workshops or dwellings, with building J being an iron smithy, and building D a carpentry workshop.