Current Archaeology magazine always features interesting articles, this one is nor exception.

Rather than answering the many questions regarding medieval Vikings origins, this very interesting article ads to the mystery, which is a good thing. Perhaps one day we might actually know who these ancient people dubbed Vikings really were and from whence they came. (Ed.)

A large study, led by researchers from the University of Copenhagen, has mapped the DNA of the Viking world. The results (recently published in Nature: https://doi.org/10.1038/s41586-020-2688-8) paint a complex picture of population movement across Europe during this period.

Over ten years, the team sequenced the DNA of 442 individuals whose remains were excavated at archaeological sites across Europe and Greenland, combining it with previously published genetic data from 1,118 ancient human remains as well as DNA from 3,855 people living today. One of the biggest findings from the study was how region-dependent the genetic differences within Scandinavia were. While we often lump all Scandinavians from this period together under the term ‘Viking’, there were actually fairly distinct groups, with individuals from the areas of present-day Norway, Sweden, and Denmark displaying specific genetic signatures.

Not only did these groups remain separate within Scandinavia, they also appear to have chosen different regions to invade. The DNA results largely accord with archaeological and historical evidence, indicating that those with Swedish-like DNA mainly travelled eastwards, including around the Baltic region and into present-day Poland; those with Norwegian-like DNA explored the North Atlantic islands, Ireland, Iceland, and Greenland; and those with Danish-like DNA largely went to the British Isles. This adds to other evidence suggesting that the use of the word ‘Dane’ in written sources from medieval Britain – which is sometimes thought of as a catch-all term for ‘Scandinavian’ – may originally have referred to those hailing specifically from Jutland.

The results also show that the term ‘Viking’ was not necessarily a label affixed only to those originating from Scandinavia. Two individuals from Orkney were buried in a Viking fashion, but had no identifiable Scandinavian heritage. Instead, they were more genetically similar to present-day Irish and Scottish populations. The project also found other evidence for cross-cultural connections between the Picts and the Vikings, including two more individuals buried in Orkney who had half Scandinavian ancestry, and five individuals with similarly blended DNA found in Scandinavia.

This last example is just one of many from the dataset which shows movement happening in the reverse direction, with individuals from Britain making their way into Scandinavia – and into the local genetic signature as well.
Posted by J A Hunsinger at 12:00 No comments:

The reader is encouraged to visit Ancient Origins web site for the original article - click on the title link.

This is a huge discovery. It will take years to determine exactly what has been found by carefully opening some of the mounds. (Ed.) 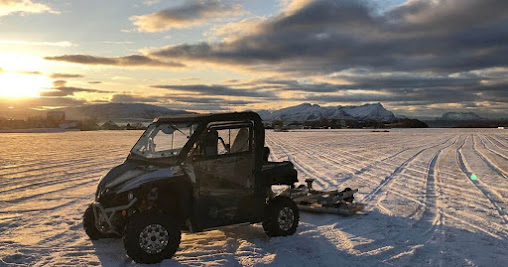 An extensive survey using ground penetrating radar in northern Norway has revealed the presence of 15 gigantic Viking burial mounds , along with other measurable remains of ongoing human activity. Based on their sizes, shapes, and designs, archaeologists have dated the mounds and other surrounding features back to the eighth century AD, when the Vikings were beginning their era of expansion and conquest.

Future excavations could reveal new and fascinating details about the beliefs and practices of the settlers who occupied this perpetually frigid and semi-frozen stretch of land, in a time when the predations of the Vikings rudely introduced Scandinavian culture to the outside world.

The survey was undertaken in November 2019 by researchers affiliated with the Norwegian University of Science and Technology in Trondheim. Using ground-penetrating radar (GPR) devices with a penetrating range of three meters (10 feet), they carefully explored a rectangular area covering 24 acres (10 hectares) in the snow-covered fields of Bodøsjøen, a village in the municipality of Bodø located along the windswept coast of the Norwegian Sea. 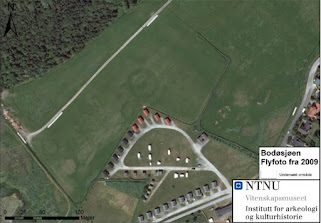 The discovery of the burial mounds in Norway was not a surprise. Aerial photographs had already picked up subtle signs of their presence, and it was in fact these photographs that prompted the 2019 survey. ( Norge i Bilder )

The discovery of the burial mounds was not a surprise. Aerial photographs had already picked up subtle signs of their presence, and it was in fact these photographs that prompted the 2019 survey. But what fascinated archaeologists the most was the discovery of 32 moderately-sized oval ditches, an enigmatic feature that has never been seen before in GPR surveys or excavations in this part of Norway. The ditches were oriented similarly, with their narrowest ends facing toward the sea. This suggests the ditches were constructed to minimize exposure to wicked eastward winds, which are frequent and often unrelenting in this part of the globe.

Here’s an interesting article from The Science Times about a much-debated subject: what happened to the Greenland Norse?

It’s a good question and one that isn’t answered by this article. It has all been said by other authors down through the years, but the fact remains that we simply do not know for certain and I doubt we ever will.

I prefer to think that the Norse settlers gradually assimilated with Indian groups in North America as their business with Europe dried up and the Mini Ice Age descended on the north country with a vengeance. (Ed.)

Around 985AD, Erik the Red founded Norse communities in Greenland after his exile from Iceland that thrived for centuries. However, it did not last as it vanished in the 1400s only leaving ruins as seen today in Greenland.

Artifacts found from this civilization revealed many walrus ivory sculptures, which provide evidence of a trade network that once extended from Northern America to the Mediterranean.

The Norse communities were able to forge a lucrative economic mainstay in Greenland despite its harsh environmental conditions, Discover reported. Theories about why Norse communities in the area abandoned it is because of climate change with the climate growing colder.

But studies published in the last five years, particularly the 2019 study of the researchers from the universities of Cambridge, Oslo, and Trondheim, found that the Norse communities did not disappear due to climate, but because of the increasing unstable walrus ivory trade.

A thousand years ago, walrus ivory was a valuable medieval commodity used by the Norse communities in Greenland to trade with those from Europe. Norse in Greenland carved ornate crucifixes, pieces for games like chess, and hnefatafl made from walrus ivory. Even the famous Lewis chessmen were also made of walrus ivory.

However, the study said that this trade slowly went from an economic blessing to become a curse. James H. Barrett, an archaeologist at the University of Cambridge and lead author of the study, and his team found that the ivory came from smaller animals, often female, as time wore on.

They tested the bones and found that some of it could even come from ever farther north, which means they must have voyaged for longer periods of time in dangerous journeys but a lesser reward.

"This really cranks up the amount of danger they are facing," said Tom McGovern, an archaeologist from Hunter College in New York who was not part of Barrett's research team.

Science Daily reported that the increasing elephant ivory trade that flooded the European markets during the 13th century, and changes in fashion have led to the decrease in demand for walrus ivory. By the 1400s, walrus ivory imports to mainland Europe have slowly faded.

Barrett said that the Norse abandonment in Greenland may have been due to the depleted resources and volatile prices that were worsened by climate change.