Runriket, Where the Power Struggle of a Viking Ruler is Written in Stone

If your interest in the Viking Age includes the runes, this article from Ancient Origins will peak your interest. (Ed.) 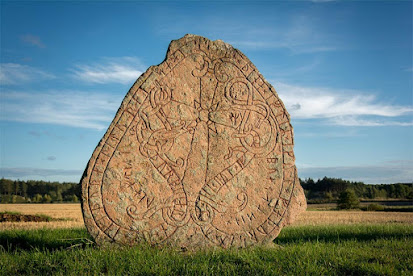 The Viking era (800 -1066 AD) is arguably one of the most fascinating in history. Runriket, or the Rune Kingdom, is a unique archaeological area in Sweden, containing more than a hundred runestones with a great number of inscriptions. Runriket is the largest known concentration of runestones in the world and they offer us the opportunity to get close to Sweden’s ancient Viking past.

The Rune Kingdom and the Age in Transition
Runestones are monuments with inscriptions written in the Runic alphabet . They were typically engraved by experts known as ‘rune masters’. While Christian writers often portrayed the runes as sinister, many of them were simply memorials. Researchers are able to better understand the mindset and history of the Viking world through these writings as the Rune Kingdom demonstrates the complexity of Viking society and culture in ancient Sweden.

The majority of the runes date to the 11th but especially the 12th century. While we may regard the Vikings as pagans who worshipped the gods Thor and Odin, the reality was rather different. Many of them had been Christianized or at least partly Christianized. Through the 11th century, the pagans and the Christians had agreed to co-exist in a unique instance of tolerance in the Middle Ages . By the 12th century, Sweden was mostly Christian
Read more...
Posted by J A Hunsinger at 16:39 No comments:

As the ice melts in Norway, they are finding lots of artifacts both older and younger than the Viking Age we are interested in.

I think the reader will find the article engaging. (Ed.)

Archaeologists have uncovered a "treasure trove" of artifacts as another major ice patch melts away in the Norwegian mountains, revealing a total of 68 arrows and many more items from an ancient reindeer hunting site.

The earliest finds go back some 6,000 years, according to radiocarbon dating. They include reindeer bones and antlers, as well as scaring sticks used to herd the animals into spots where they could be more easily hunted.

Finds like this are becoming increasingly common as global temperatures rise – especially underneath static patches of ice, which don't move around and break up objects in the same way that glaciers do. As the planet's future becomes more uncertain, more of its past is being revealed.

"It is the ice site in the world with most arrows, and by a large margin," writes archaeologist Lars Pilø, from the Department of Cultural Heritage at Innlandet County Council in Norway. "Doing fieldwork here and finding all the arrows was an incredible experience, an archaeologist's dream."

"I remember telling the crew: 'Enjoy the moment as much as you can. You will never experience anything like it again.'"

The potential discoveries were so significant that the group of researchers kept the location of the site – the Langfonne ice patch in the Jotunheimen mountains – a secret for years, until all the artifacts had been recovered.

The dates of the finds stretch from the Stone Age to the Medieval period, with different patterns across different time periods. Most of the arrows are from Late Neolithic (2400-1750 BCE) and Late Iron Age (550-1050 CE) eras.

In trying to piece together some of the history of the area from the discoveries, the researchers had to take a lot of different factors into account: the movement of ice and meltwater, the impact of winds and exposure, and so on.