This installment from Medievalists briefs us on a very important archaeological site in southeastern Norway, off Oslo fjord, that is believed to be the largest Viking burial site extant. (Ed.) 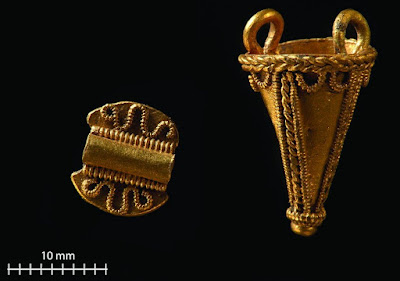 Gjellestad was a major Viking burial ground, new research reveals
Gjellestad, Norway, is home to the Jell Mound, one of the largest early medieval funerary mounds in all of Scandinavia. However, new research suggests that this is just scratching the surface— the site may also feature a previously unknown Viking ship burial, cult site, and feast hall.

The discovery, published in the journal Antiquity, was made without digging up the site. Instead, ground-penetrating radar (GPR) was used to map features below the surface. This survey began in 2017 to determine if construction plans would put any archaeology near the Jell Mound at risk. Historical records indicate three other funeral mounds at the site were demolished in the 19th century, suggesting there is more to the site than meets the eye. However, it turns out that even the three demolished mounds are just the tip of the iceberg.

The GPR showed 13 burial mounds once existed at Gjellestad, some over 30 metres wide. One of these mounds features an anomaly in the GPR data that likely represents a buried ship. Such ship burials were likely reserved for powerful Viking individuals. Additionally, the researchers found a farmhouse in the GPR data. They also spotted a large building, likely a feast hall, and another hall that does not appear intended for habitation. Instead, it may be a cult house or other religious structure. 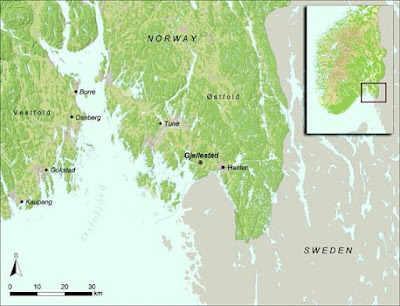 Location of Gjellestad close to the eastern shores of the Oslofjord, Norway, along with well-known contemporaneous sites around the Oslofjord (map source: © Kartverket/CC-BY-4.0; figure by L. Gustavsen).
Read more...
Posted by J A Hunsinger at 10:42