Here's an interesting article from Sputnik News about a sword found in Norwegian farm field by a man using a metal detector, once again proving the old adage about being in the right place at the right time. (Ed.) 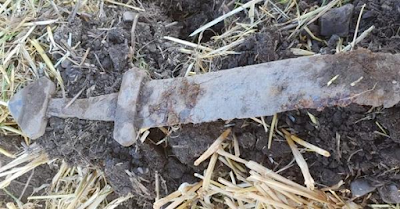 He describes his reaction as a mixture of surprise and joy. He rushed to call local archaeologist Lars Holger Pilø. Pilø recalled having “one happy detectorist on the phone”, describing it as a special discovery and praising Høystad-Lunna for putting a lot of work into his hobby and his concern for doing everything right.

“It is not common for people to bring in weapons. They mostly find jewellery, buckles, and smaller objects, so bringing in a sword is a rarity indeed”, fellow archaeologist Kjetil Skare explained.

According to Pilø, the sword seems to date from the early Viking age, is about 1,200-years-old and belongs to an uncommon type. Viking swords have been found in Innland County before, but most of the finds were made in the 19th century, he explained. This is all the more dramatic given that the sword was found in cultivated land, where whole artifacts are rare as they tend to be damaged or destroyed by ploughs.

“There are even preserved remnants of leather or textile that are wrapped around the grip”, Pilø noted.

Pilø stressed that archaeological finds were made on the same farm before, although not of the same calibre or level of preservation.

Summing up, he once again stressed the importance of amateur archaeology with the help of metal detectors, as long as it is done the right way.

“The antiquities that lie in farmland slowly break down and are lost due to cultivation”, Pilø said, praising Høystad-Lunna for saving the sword for posterity.
Read more...
Posted by J A Hunsinger at 12:26