Ancient Origins never fails to produce timely articles on the medieval Vikings. This article, published on 23 April 2022 is no exception.
As always I have provided a link to the article on the Ancient Origin website for those who want "the rest of the story."
It always amazes me to see how the left-wingers manage to insert verbiage on climate change into an article that has nothing whatever to do with the term. They managed to insert it into the very first sentence this time.
You will note that one of the archaeologists uses a strained supply of walrus ivory for the Greenland Viking's trade with Europe to cease and as the reason for their abandonment of their settlements on Greenland sometime in the 15 century. His contention is theory; nobody knows why they disappeared, nor even where they went. (Ed.)
***

With the accelerated pace of climate change and global warming wreaking havoc on the ice sheets of the world, particularly Greenland, new evidence emerges from the ice-capped country. Greenland was a Viking colony from the 10th-15th century. They suddenly abandoned it and scholars are still debating why the Vikings left, with new evidence emerging just last month . Now, a study published in the journal Proceedings of the Royal Society B reveals Vikings shipped walrus ivory from their settlement in the icy colony all the way to Kyiv, over 4,000 kms away!

“Based on the [walrus] rostra finds reported here, it is reasonable to hypothesize that a Dnieper route may have augmented or replaced pre-existing practices,” write the authors of the study.
The Site in Kyiv: A Medieval Trading Waterfront

Evidence was collected from excavations carried out by archaeologist Natalio Khamaiko of the National Academy of Sciences of Ukraine, who’s been persistently digging at a vacant lot at 35 Spaska Street in Kyiv, Ukraine since 2007. This site had notoriously disappointed all of Khamaiko’s predecessors, who had conducted detailed archaeological surveys here in the hope of uncovering gold – after all, Norse merchants used to trade furs for silver minted in the medieval Islamic world, and this waterfront had witnessed an all-around boom in economic activity.
Read more...

Did the Vikings Actually Torture Victims With the Brutal ‘Blood Eagle’?

This interesting article was published in Smithsonian Magazine, December 2021. The author(s) delve into everything known about the Blood Eagle, an imaginative method of torture and execution used by the Norse Vikings.

If the topic is of interest draw your own conclusions. (Ed.)

New research reveals the feasibility of the infamous execution method 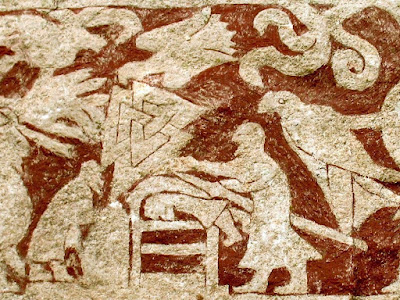 In each of the extant nine accounts, the victim is captured in battle and has an eagle of some sort carved into their back. Wikimedia Commons under CC BY-SA 4.0

Did the Vikings Actually Torture Victims With the Brutal ‘Blood Eagle’?

In popular lore, few images are as synonymous with Viking brutality as the “blood eagle,” a practice that allegedly found torturers separating the victim’s ribs from their spine, pulling their bones and skin outward to form a set of “wings,” and removing their lungs from their chest cavity. The execution method shows up twice in the popular History Channel drama series “Vikings” as a ritual reserved for the protagonists’ worst enemies, Jarl Borg and King Ælla, a fictionalized counterpart to the actual Northumbrian ruler. In the video game “Assassin’s Creed: Valhalla,” Ivarr the Boneless, a character based on the Viking chieftain who invaded the British Isles in the ninth century C.E., performs the blood eagle on his nemesis, King Rhodri.

These representations take their cue from medieval sources written in both Old Norse and Latin. In each of the extant nine accounts, the victim is captured in battle and has an eagle of some sort carved into their back. Some references to the torture are terse. Others are more graphic, aligning with the extreme versions depicted in contemporary popular culture. Either way, the ritual’s appearance in these texts is intended to send a message tied to honor and revenge.
Read more...